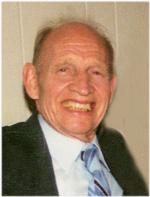 POWERS, William P.- Of Chelsea, July 16th. Devoted husband of the late Margaret (Matherson) Powers. Beloved father of Stephen Powers and his wife Judy of Chelsea, Ronnie Barker of Saugus and the late Joan Gardina, Thomas Westmoreland and David Westmoreland. Father-in-law of Elaine Westmoreland of Saugus and Gino Gardina of Florida. Dear brother of Mary Bradley and her husband Frank of Medford and the late Theresa Leonard, John, Cornelius and Robert Powers. Lovingly survived by many grandchildren, great grandchildren, nieces and nephews. Family and friends are kindly invited to attend a Memorial Mass celebrating his life on Thursday, July 21st at 5:45 PM in St. Michael the Archangel Chapel on the grounds of the Chelsea Soldiers Home, 91 Crest Avenue, Chelsea. Expressions of Sympathy in Williams name may be made to St. Michael the Archangel Chapel.
A lifelong resident of Chelsea for over 94 years, William passed away peacefully at the Chelsea Soldiers Home around noontime on Saturday. A graduate of the Chelsea School System, for over 39 years until his retirement at the age of 61 he worked for American Biltrite, where he also served as Union Steward. A United States Army Veteran of World War II, he was also a member of the DAV.