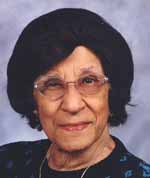 Valentina N. (Nereu) Almeida, 96, of New Bedford died Monday December 21, 2009 at St. Luke's Hospital. She was the wife of the late Frank Almeida.

Born in New Bedford, the daughter of the late Francisco and Margarida (Oliveira) Nereu, she lived in New Bedford all of her life.

She was a parishioner of Our Lady of the Assumption Church.

Mrs. Almeida was formerly employed by the City of New Bedford as the head clerk in the Auditor's Office, and later was the fiscal officer for the Redevelopment Authority until her retirement. She later performed accounting work for Cruz Construction Company until her retirement at the age of 91.

She was received a Bachelor's degree in Accounting from the New Bedford Textile Institue and a Bachelor of Arts degree in Portuguese Culture and Language from the University of Lisbon.

Mrs. Almeida was a devoted and respected member of the local Cape Verdean Community. She spent countless hours assisting newly-arrived immigrants to deal with financial, legal, cultural, social, and citizenship issues. She received numerous honors and citations from government agencies and cultural organizations for her unselfish dedication in helping others.

Survivors include two nieces, Margaret J. Nereu of New Bedford and Anna N. Gomes and her husband John of Middleboro; two great-nephews, Joseph Nereu and Sean McCormack; a great-niece, Jacqueline Gomes; and a great-great-niece, Madison Nereu.
She was the sister of the late Adalberto "Sonny" Nereu, Manuel Nereu, Angelina Nereu and Francisco Nereu.

Her Funeral Mass will be celebrated on Monday Dec. 28, 2009 at 9 AM at Our Lady of the Assumption Church. Burial will follow in St. John's Cemetery. Visiting hours will be on Sunday from 2-6 PM at the Saunders-Dwyer Home for Funerals, 495 Park St., New Bedford. For directions and guestbook, please visit www.saundersdwyer.com.