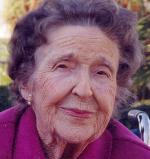 Frances Elizabeth Maddox Bennett, beloved matriarch of the Maddox-Bennett and related family lines, passed away peacefully Monday night, November 2, 2009. She was 97. A celebration of her life will be held at 2:00 p.m. on Friday, November 6, 2009, in the Memorial Chapel of Tifton’s First Baptist Church. Dr. Wayne Roe will officiate with burial to follow in Tift Memorial Gardens. The family will receive friends on Thursday, November 5, 2009, from 6:00 to 8:00 p.m. in the Chapel of Bowen-Donaldson Home for Funerals.

Descending from a long line of early patriots, her lineage is rich in history, with ancestors serving in the first Virginia House of Burgesses, who proved to be instrumental in the settlement of that colony. From the Earliest settlements in this country, through the different wars fought for freedom, her ancestors made their mark in history, passing down to her a great sense of patriotism and pride in her country. As the granddaughter of a circuit-riding preacher and having a grandmother who marched for Women’s Suffrage, the stage was set for her life as a Christian and as a patriot.

Born on November 14, 1911, in Mount Vernon, she was the first daughter of Henry Thornton Maddox and Jessie Belle Butts Maddox. She lived on the campus of Union-Baptist Institute (known today as Brewton-Parker College), where her father was Agricultural Engineer at the college. At the age of four, she moved with her family to Douglas, where she was educated in the Douglas Public Schools. She excelled in track, pole vaulting and basketball during her high school and college years. Reared in a musical family, it was during these years that she became a serious violin student, deepening her appreciation and love for musical pursuits. While continuing her education at the Women’s College of Georgia, she was a member of Phi Lamda Sorority, as well as First Chair Violinist for the Valdosta Symphony Orchestra. After auditioning, she was awarded a chair with the Cincinnati, Ohio Symphony Orchestra as violinist but, due to contracting Undulent Fever, was unable to fulfill that achievement. She later received certification in Library Science through the University of Georgia system as an off-campus student.

A member of Tifton’s First Baptist Church for 78 years, she is remembered for her love of God, of family, of friends, of country, her steadfast prayers, and her kind deeds. Throughout the years of child-rearing, Mrs. Bennett was actively involved in the youth organizations of the church, as well as in the adult organizations, serving many roles. For many years, she visited church shut-ins and new mothers, delivering devotional materials to them. As a doting grandmother, she was always an encourager and took great delight in her grandchildren, great grandchildren and great-great grandchildren. A long-time member of the Bessie Tift Sunday school class, she spoke lovingly of her classmates. As the guiding force in organizing the Tifton String Ensemble Orchestra, this group grew in size under her dedication and leadership, playing for many Tiftarea occasions. Several young people in the Tiftarea studied violin from her, some of whom became members of the orchestra, including her daughter, Carolyn. In earlier years, she often played her violin for her children’s school classes, at their teachers’ invitations, as well as in area churches, and at community events for special productions. She encouraged her children and their friends to visit the residents of nursing homes, where she would plan and participate in the visitation and musical entertainment. The Bennett children and friends fondly remember the mini-concerts, often impromptu, that took place frequently in their home, with various family members and friends taking part during their growing years. Through the years, she held membership and offices in the Tifton Music Club, the Tifton Woman’s Club, the United Daughters of the Confederacy, and the American Legion Auxiliary. She was an avid supporter of the Tifton Concert Series in earlier years and became a Gold Star Sister in the American Legion Auxiliary, following the death of her brother, Captain “Red” Maddox in World War II, one of the famous “Flaming Reds” of University of Georgia football fame. She also held membership in the Descendants of Point Lookout Organization and in America’s First Families. Under the auspices of the United Daughters of the Confederacy, she organized the first Children of the Confederacy in Tifton, in which several of her own children were fortunate to learn in-depth about our country’s early history. The last several years of her life found her enjoying luncheons with the members of the Golden Age Club, as her health permitted, as well as enjoying visits from her family and friends.

Married on August 10, 1930, at the Pierce County Courthouse in Blackshear to the late Jasper “Jack” Bennett in Pierce County, she was a resident of Tifton for 78 years. At the time of her beloved husband’s death at 110 years of age, he had been published as the Oldest Living World War I veteran in the state of Georgia, as well as in the United States. In 1997, they received the honor of being recognized by the Tifton Gazette as the longest married couple in Tifton and then the Valentine Couple in 1999. They were married for 72 years and nine months at the time of his death. Also preceding her in death was her beloved eldest daughter, June Elizabeth Bennett Lindsey; an infant daughter; a son-in-law, James Ross Lindsey, Sr.; her first-born grandson, James Ross Lindsey, Jr.; a great grandson, Colby Ross Hooper, her parents, Henry Thornton and Jessie Belle Butts Maddox; her brothers, the Reverend Julian Thornton Maddox, Ralph “Red” Carlyle Maddox, Hugh Gilbert Maddox, Sr., Addison Brewton Maddox, James Reese Maddox; a sister, Martha Dandridge Maddox Hayes; sisters-in-law, Pat4ricia Griffith Maddox and Althea Todd Maddox; a brother-in-law, Dr. Clemons Hayes; and several nieces and nephews.

Her children wholeheartedly agree that their mother’s life was indeed a symphony of enduring love and song, lived unselfishly for others, and dedicate this poem to her.
The Unending Symphony
The sun will surely rise again
And rivers will run to the sea,
The ocean waves will crest and roll,
The eagle will always fly free.
Just as certainly heaven waits
For all those who believe;
While God in His infinite mercy
Sustains all those who grieve.
In the unending symphony of life,
You have played such a special part.
The song of your life will remain
for all Who have memories of you in their hearts.