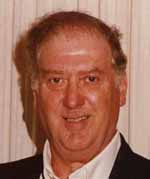 Charles Xavier, 78, of New Bedford died June 28, 2009 at Hathaway Manor Extended Care Facility after a brief illness. He was the husband of Evelyn (Brazil) Xavier.
Born in New Bedford, the son of the late Carlos and Rosa (Vieira) Xavier, he lived in New Bedford all of his life.
Mr. Xavier was a communicant of Holy Name of the Sacred Heart of Jesus Parish.
He was formerly employed by New England Telephone Company for many years as a lineman until retiring from special services and was a member of the Pioneers Club.
Mr. Xavier served in the U.S. Army during the Korean War. He was the recipient of the Korean Service Medal with three Bronze Service Stars, the Combat Infantry Badge and the Army of Occupation Medal with Japan Clasp.

He was a member of Andrews-Dahill Post 1531 Veterans of Foreign Wars. Mr. Xavier enjoyed traveling and watching the Patriots and Red Sox.
Survivors include his wife; 2 sons, Charles Xavier, Jr. and his wife Stephanie of San Francisco, CA and Jim Xavier of Los Angeles, CA; a daughter, Paula Xavier of New Bedford; many cousins; a niece, Barbara Wade and her husband John; his sister-in-law, Virginia Brazil; and 6 godchildren, George Varao, Jr., George Czechowski, William Xavier, Lucille Silva, John Pacheco and Sharon Boulanger.
Funeral from the Saunders-Dwyer Home for Funerals, 495 Park St., New Bedford Wednesday July 1st at 9 AM. Funeral Mass at Holy Name of the Sacred Heart of Jesus Church at 10 AM. Burial will follow in St. John's Cemetery. Visiting hours will be on Tuesday, June 30th from 4-8 PM.