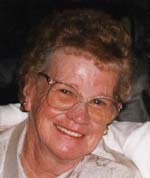 Ruth B. (Bishop) Loughlin, 79, of Fairhaven died May 3, 2003 at home after a brief illness surrounded by her family.

Mrs. Loughlin was born in New York City October 28, 1923. After her father was lost at sea, as an infant, she moved to Nantucket where she resided for several years. She also resided in East Boston and Revere before moving to Fairhaven in 1941.

She was a communicant of St. Joseph's Church in Fairhaven.

Mrs. Loughlin was a graduate of Holy Family High School, class of 1942, where she was a member of the cheerleading squad. She had a great affection for her girlfriends on the team as well as her classmates and her school.

Mrs. Loughlin was a graduate of Kinyon Campbell Secretarial School and became an executive secretary at Goodyear Corp., Aerovox and Valor Manufacturing Company. She was previously employed as function manager at the New Bedford Hotel and later at the Holiday Inn in New Bedford. In her latter years, she worked for the Town of Fairhaven as a clerk in the Town Clerk's Office.

She was a member of the Fairhaven Town Hall Retirees and a former member of St. Joseph's Church Couples Club and the New Bedford Catholic Women's Club.

Mrs. Loughlin had a great devotion to her family and grandchildren.

She was the sister of the late Gerald Bishop, Mary Jane Howland Dompierre and Elizabeth Powers.

Funeral from the Saunders-Dwyer Home for Funerals, 495 Park St., New BedfordWednesday, May 7th at 8:45 AM.Funeral Mass at St. Joseph's Church, Fairhaven at 10 AM.Relatives and friends are invited to attend.