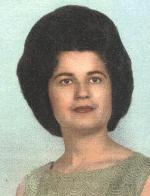 She was born July 20, 1934 in Kambohori Arcadia, Greece a daughter of the late Athanasios and Nicoletta(Varelas) Mourtzinos.

Mrs. Xigoros was educated in Greece, where she married her husband of 47 years, Mr. Fotios Xigoros in 1961. Following their marriage they came to the United States settling in Lowell.

She worked as a stitcher for many years at Lark Dress and later on up until her retirement Robert Leonard.

Mrs. Xigoros was pre-deceased by her sister in law, Georgia Hantzis.

Friends will be received at the M. R. LAURIN & SON FUNERAL HOME, 295 Pawtucket St. Lowell on Sunday from 4 to 8pm. Her funeral will take place on Monday at 9am from the Funeral Home followed by services at the Assumption of Virgin Mary Greek Orthodox Church at 10am. Interment to follow in Westlawn Cemetery. IN LIEU OF FLOWERS, memorial donations may be made in her memory to the Assumption of Virgin Mary Church, 1160 Mammouth Rd Dracut, Ma. 01826.