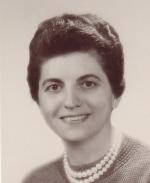 Theodora E. George passed away at her home in North Andover on May 26th, 2007. She was born on February 29th, 1920. She was the daughter of the late From and Haseeba George.

She was a graduate of St. Mary's High School class of 1937, Katherine Gibbs School in Boston, and Columbia University in New York City where she received a Bachelor of Science degree in Archeology.

Theodora was an Administrative Assistant at the R.S. Peabody Museum at Philips Academy and also at the Registrar's office at Harvard College.

She will be missed forever by all those whose lives she touched with endless kindness, dignity and intelligence.

Calling hours and burial will be private. Family and friends are invited to a funeral mass on Wednesday, May 30th, 2007 at 10:00 AM in St. Michael's Church in North Andover, MA.

Funeral arrangements are under the direction of the John Breen Memorial Funeral Home Inc. For information online or to submit online condolences go to: www.breenfuneralhome.com.

Contributions in her memory may be made to the charity of one's choice.