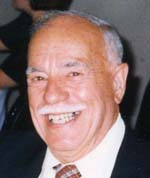 He was the husband of the late Muriel C. (Lamonde) Gioiosa, with whom he celebrated 50 wonderful years of marriage.

He was a communicant of St. Anne's Church.

Mr. Gioiosa was formerly employed by the New Bedford Fire Department for 34 years until his retirement as District Fire Chief in 1985. He had received numerous commendations for bravery in the line of duty.

Mr. Gioiosa was a member of the Disabled American Veterans, Dr. C.E. Burt Chapter #7. He was an avid swimmer, bicyclist, and walker. During World War II, he served in the U.S. Army and participated in the Battles of Northern France, the Rhineland, and Central Europe. He was awarded the European-African-Middle Eastern Theater Campaign Ribbon, the Victory Medal, and the Good Conduct Medal.

He was the brother of the late Anthony Gioiosa.

Funeral from the Saunders-Dwyer Home for Funerals, 495 Park St., New BedfordMonday, September 16th at 8:30 AM.Funeral Mass at St. Anne's Church at 9:45 AM.Relatives and friends are invited to attend.