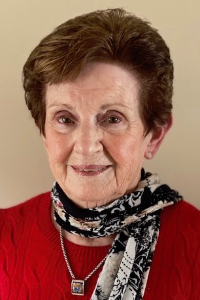 Barbara W. (Wagner) Godin, 82, of Franklin died peacefully at home surrounded by her family on Tuesday, January 24, 2023, after a courageous battle with pancreatic cancer. She was the beloved wife of the late Thomas J. Godin with whom she shared 57 years of marriage.

Born in West Springfield, Ma on July 1, 1940, Barbara was the daughter of the late Joseph W. Wagner and Rose B. (Bonzagni) Wagner. Barbara lived in Franklin for almost 60 years.

Barbara was a graduate of American International College and received her Associates Degree in Business. It was during her time at American International College that she met the love of her life, Tom. In addition to working as an administrative assistant for the St. Mary’s CCD program, and local businesses, she worked in Boston at the Law Firm of Rackemann, Sawyer and Brewster (now Verill) for over 40 years.

Barbara was a communicant of St. Mary Parish for almost 60 years and was very active in the parish and was the Producer for musicals such as Annie Get your Gun, Oliver, The King and I and others during the late 70s and early 80s. She was a member of the Parish Club and coordinated many dances and parties. Barbara worked for several years behind the salad booth at the Feast of St. Rocco and was one of the “Rocco Rockettes”. In addition, she taught CCD for many years. Barbara served as a Eucharist Minister until she became ill in August 2022.

While her kids were growing up, Barbara enjoyed watching their soccer, basketball, football and hockey games, at one point serving on the Board of Directors for the Franklin Youth Hockey Association. She also relished watching her granddaughters Samantha and Emma play basketball, lacrosse and volleyball. Being part of Jeff and Tammy’s support crew when they ran marathons, ultra-marathons, Spartan and Ironman races was always one of her favorite activities.

Barbara loved to travel with her family to Cape Cod, Florida, New Hampshire, Aruba and Colorado. Barbara also traveled extensively with her husband Tom across most of Europe. Among her favorite places to visit was Tanglewood in the Berkshires to watch the Boston Symphony Orchestra, which she did for over 40 years.

Relatives and friends are invited to attend her funeral Tuesday January 31st, at 10:00AM from the Charles F. Oteri and Son Franklin Funeral Home 33 Cottage St. followed by a funeral Mass in St. Mary's Church, 1 Church Square Franklin at 11:00AM.

Interment will be private at a later date.

In lieu of flowers, donations may be made in her name to the Pancreatic Cancer Action Network: https://pancan.org