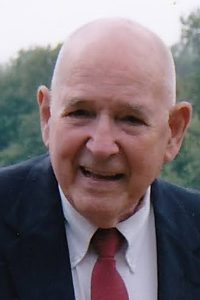 After high school in Niagara Falls NY, Larry played semi-pro baseball briefly for the Rome (NY) Colonels before matriculating at the US Naval Academy, where he played varsity football and baseball. Upon graduation in 1954, he was commissioned as an officer in the United States Air Force, where he served as a B-52 bombardier for many years. It was in this role that he flew with crews that took part in the top-secret testing of hydrogen bombs in Operation Dominic.

He met his beloved wife Kathy while stationed in Germany, where they married in 1958. They returned to the United States in 1961, after tours in Germany and England, where his Air Force career took their growing family from San Diego, CA to Dayton, OH, to Washington, DC.

While assigned to the Pentagon, Larry led the team that delivered the first computerized data systems (non-ballistic) for the Air Force, which began his lifelong interest in computers. He retired as a Lieutenant Colonel. He and his family moved to Melvin Village, NH, where he began a new career as a teacher and officer/adviser to the Junior ROTC program at Spalding High School in Rochester, and Kathy continued her teaching career first at Tuftonboro Elementary School and then Moultonborough Elementary School. Larry was an avid reader and sports fan; he cheered passionately for the New England Patriots, the Boston Celtics, the Boston Red Sox, and the University of Nebraska Cornhuskers. He and Kathy loved to travel, and took many trips in Europe and in the United States.