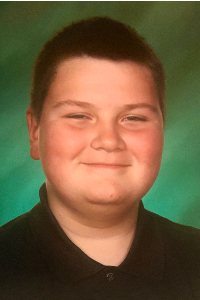 Ian Robert Shumaker, 11, of Bellingham, died Saturday, December 3, 2022, at Boston Children’s Hospital of complications from an unsuspected medical condition. He was the beloved son of Corey and Elizabeth (Smolak) Shumaker and loving brother of Crosby Shumaker of Bellingham.

Born in Newton on March 23, 2011, Ian was a lifelong resident of Bellingham, attended 6th grade at the Bellingham Memorial School and was in the percussion section of the school band.

But above all Ian loved being a big brother to Crosby. He was always playing with him, teaching him, and protecting him. He often said that it was his favorite thing to be, Crosby’s big brother.

Ian was destined to help people and to do great things. He had recently started saying that he wanted to be a US Senator when he grew up, maybe even President.

Everyone who knew Ian also knew how much he loved Christmas. It was his favorite time of year. He couldn’t wait to decorate the house and the tree, and for the annual return of Buddy the Elf and his notes to the boys. He would spend hours snuggled up on the couch with some hot coco and a Christmas movie. But really it didn’t matter if it was December or July he was most likely humming Jingle Bells under his breath.

In honor of this love of Christmas and belief that he would do great things and help people, the family decided that Ian would be giving the gift of organ and tissue donation. It is their hope and solace that their tragedy may be someone else’s Christmas miracle.

In addition to his parents and brother, Ian is survived by his grandparents Stanley H. Smolak, Jr. of Dedham and Suzanne Shumaker of Ashburnham and he was also grandson of the late John Shumaker.

Ian is also survived by his many so called “aunts & uncles,” forever friends, and classmates.

Relatives and friends are invited to attend calling hours on Friday December 9 from 3 – 8 p.m. in the Ginley Crowley Funeral home, 3 Barber Street in Medway (www.ginleyfuneralhomes.com).

His funeral Mass will be held on Saturday, December 10 at St. Mary’s Church in Franklin at 10 a.m. Burial will follow at the parish cemetery.

In lieu of flowers, expression of sympathy may be made in Ian’s memory to a local toy drive or Marine Toys for Tots – Greater Boston, 1st Battalion 25th Marines, 53 Quebec St., Fort Devens, MA 01432.