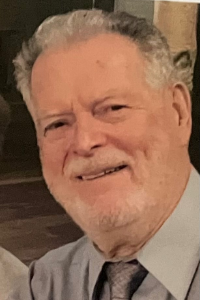 James F. Collins, 85 of Windham, NH died Sunday, December 4, 2022, in his home surrounded by his loving family. He was born on June 25, 1937 in Somerville, MA, son of the late William and Christina (Burke) Collins. Jim was very proud to be a US Army Veteran and served during the Korean era. He started a successful Millwork company in 1962, which he ran until his retirement.

He is survived by his wife of 63 years, Carolyn (Gillis) Collins of Windham; his daughters, Maureen Keefe and her husband Doug of Hudson, NH, and Polly Drouin and her husband Steve of Dunbarton, NH; son James W. Collins and his wife Robie of Windham, NH; seven grandchildren, Christopher Keefe, Jessie (Keefe) Marshall, James Keefe, Derek Drouin, Shannon Drouin, James T. Collins, and Kiley Collins, as well as great granddaughter Quinn Marshall. He was predeceased by his siblings, William Collins, Frank Collins and Norma Walsh, and his grandson Patrick Keefe.

Jim was very active throughout his lifetime. He and his wife Carolyn enjoyed many trips traveling with friends and spending time at their homes in Florida and on Lake Winnipesaukee. He was proud to be one of the founding members of Lake Shore Park in Gilford, NH and enjoyed over 50 years there with his family. Some of his favorite activities included snowmobiling, boating, enjoying a drink with friends and following the stock market. Jim was also an avid golfer who scored five hole-in-ones throughout his lifetime.

One of Jim’s favorite things to do was spend time with family and friends, especially his grandchildren who were continuously amazed by his generosity and extensive knowledge which he passed on to them.

The family asks that you join them for a celebration of Jim’s life to be held Sunday, December 18 at the Derry-Salem Elks Lodge (Top floor) from 3 – 7.