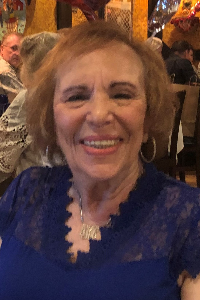 Joan was born in New York City and lived during her childhood years on the Upper West Side of Manhattan with her older sister Carol and her parents David and Minnah Nieman.

She received her college degree from Syracuse University in 1951 with a bachelor’s in journalism. She moved to the San Francisco area and then returned to New York where she met the love of her life, Irwin “Ray” Kleinman, a WW II veteran, whom she married in 1960. They initially lived in the borough of Queens where their only child and beloved son Paul was born in 1961. In 1970, they moved to the suburbs of Long Island in the village of Port Washington. Joan loved her home there where she also worked as an administrative assistant for Publisher’s Clearing House. The family were members of the Community Synagogue in the village of Sands Point.

In 1987, Ray and Joan retired to Florida to the Pompano Beach area. She and Ray enjoyed their retirement by socializing with friends and family, going out to eat, and taking vacations to Canada, the Rockies, Europe, and their favorite, cruises to the Caribbean. In 1990, her first grandchild Matthew was born, and her passion became being a grandma to 4 grandchildren.

Funeral services will be Wednesday December 7, 2022 in the Peabody Funeral Homes and Crematorium, 15 Birch Street, Derry, NH. Burial will be Sunday December 11, 2022 at 11:30 am in the Eternal Light Memorial Park of Boynton Beach, Fl.