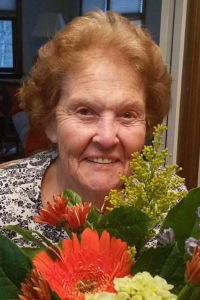 PEPPERELL        Marilyn J. Perry, 94, of Pepperell, formerly of Lowell, passed away peacefully with her family by her side, on Friday, December 2, 2022, in Westford, MA. She was the widow of Louis Perry, who passed away in 2005. During their 55 years of marriage, they enjoyed shopping together, Louis's home cooking, listening to country music, and the occasional roadtrip to Myrtle Beach or Amish Country.

She was born on November 2, 1928, in Lowell. She was a daughter of the late Cy R. Merrill and Hildur E. (Carlson) Merrill.  She grew up in Lowell, attended local schools, and started her family there. Her love for embroidering pillowcases led to many of her family sleeping on her artwork! She loved to bake - her pearl tapioca pudding, brownies and bread pudding were outstanding. She spent most nights talking on the phone with her friends and watching TV with a big dish of ice cream. Although she couldn't swim, and frankly was afraid of water, she spent a lot of time at her sister Ginny's house at Cobbetts Pond and at York Beach, Maine, where she enjoyed the ocean views and gazing at the Nubble lighthouse. It didn't take much to make her happy.

She had many nicknames including Aunt Mo, Shirley, Shirl girl, Pearl and Poopsie. She was a very loving mother, grandmother, and great-grandmother; spending time with her family is what she cherished most. Her family will always remember her sense of humor and her contagious laugh.

She is survived by her five children; Ronald and Diane Perry of New Boston, NH, Donna and Richard Crowe of Tyngsboro, Carol Perry of Pepperell, Robert and Debra Perry of Pepperell, Steven and Kimberly Perry of Pepperell; her grandchildren; Jason and Beth Perry, Ryan Crowe and his wife Emily, Devin Crowe and his wife Aryn, Lauren Bettencourt and her husband Travis, Michael Perry and his fiancé Kristina Osborne, Matthew Perry, Ashley Loyola and her husband Mario, Morgan Perry, Maddison Perry and her fiancé Charlie Cummings, and great-grandchildren; Leo Crowe, Carter and Levi Crowe, and Benicio Luis Loyola. She is also survived by several nieces and nephews. She was the sister of the late Virginia Netto, and Raymond Merrill.

Her funeral services, and burial in the Edson Cemetery will take place privately. Arrangements by the McDonough Funeral Home, 14 Highland Street, Lowell, MA 978-458-6816, find us on facebook or visit http://www.mcdonoughfuneralhome.com/ to leave the family a message of condolence at any