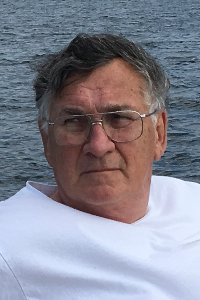 Dennis A. Trenholm, 77, of Londonderry, NH, died Sunday, December 4, 2022, in Parkland Medical Center in Derry, NH. He was born in Lynn, MA on August 2, 1945, a son of the late Charles and Elva (Gullifer) Trenholm. Dennis had been a resident of Londonderry in recent years, formerly living in Derry, NH for over forty years. A US Airforce veteran, Dennis had been employed with the General Electric Company in Lynn MA for 30 years. Following retirement, he worked maintenance at Salem Haven in Salem, NH and the Webster House in Manchester, NH.

Never one to sit still, Dennis enjoyed horseback riding in his younger years, four wheeling, camping with family and friends, tinkering in the garage and spending time with his grandchildren and great grandson.

He is survived by his loving wife of fifty-two years, Gail (Henson) Trenholm; two daughters, Nicol Trenholm and her partner Greg Vitelli of Derry and Charlotte Trenholm of Derry; granddaughter Allison Schofield of Derry, two grandsons Connor Trenholm of Derry and Michael Schofield of Sanford ME; one great-grandchild Julian Dennis; one brother, C. Lindsay Trenholm; nine brothers and sisters-in-law and many nieces and nephews. Dennis is predeceased by his sister, Gail Stanley.

Following cremation, calling hours will be Saturday, December 10, 2022 from 1:00pm to 3:00pm in the Peabody Funeral Homes & Crematorium, 15 Birch Street Derry, NH. Memorial services will follow at 3:00pm. In lieu of flowers memorial contributions may be made to the Webster House, 135 Webster St. Manchester, NH.