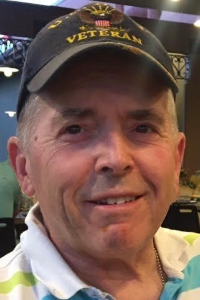 Michael “Mike” Eugene Kuntzman, a beloved husband, father, grandfather, uncle, son, brother and friend, passed away in his hometown of Ventura, California on December 2, 2022, at the age of 76 years old. Mike was born October 10, 1946 in Ventura to his parents Elmer “Gene” Kuntzman of Carlinville, Illinois and Helen Kuntzman of Casitas Springs, California.

Mike was a proud Ventura High School cougar alumni, graduating from the class of 1964. His first love was baseball having played third base for VHS then for Ventura Colleges .

His true love, however, was Zenaida “Zeny” Kuntzman, his beautiful and caring wife of 55 years, whom he met in the Philippines while serving in the U.S. Navy. He was stationed at Subic Bay on the AFDM-5 “Resourceful”. There, Mike came to love the Philippine culture, people, and language - Tagalog. In his later years he wrote a Tagalog-English handbook to help others learn Tagalog.

Mike had a love for learning and graduated with an associate degree from Ventura College, a bachelor’s degree from La Verne University, and his master’s degree at Cal Lutheran University. Mike taught college classes in criminal justice and retired after over 30 years of working for the County of Ventura as a probation officer and supervisor at juvenile hall, the child support unit, the DUI unit, and the court liason program. Mike returned to college after he retired and obtained his law degree from Ventura College of Law.

Mike was preceded in death by his loving parents Gene and Helen Kuntzman, and by his brother Stanley “Corky” Kuntzman.
He is survived by his loving wife, Zenaida Kuntzman, who was beside him every step of their 55 years of marriage as his best friend and love of his life. During the final years, Zeny was always right by Mike’s side, caring for him every moment as his nurse and wife.

Mike is also survived by his son Alan Kuntzman, daughter Adora Jensen, son-in-law Kevin Jensen, and grandson Tim Pesqueira, all of whom were loved greatly by Mike. They enjoyed being with Mike and helping him especially during his final years.

He is also survived by his dear sisters and brothers-in-law Helen & Mick Callender of Chesapeake, Virginia; Mila & Karol Nowakowski of Minnesota; Melly Savage of Oceanside and her children; Linda Freeman of Oceanside; nieces & nephews: Richard Freeman; Lynn & Todd Osborne; Karmila & Josh Beckey; JR and Jaqueline Nowakowski; and Donald Callender. In addition to the cherished family in the Philippines.

Anyone who knew Mike, knew he was the most devoted and loving family man. He enjoyed nothing more than spending time with his wife, Zenaida, and their children and being with his grandson. Mike was greatly loved by all who knew him. He was known for his big heart, generosity, kindness, quick wit, mischievousness, great sense of humor, and very positive nature. He was always there to help his friends, family, or anyone in need.

The family wishes to express their sincere and heartfelt appreciation and gratitude for the great care of Mike over the years by
Dr. Charles Murphy of Dignity Health in Ventura. Dr.Murphy was more than the best physician, he was family to Mike and his family, always going above and beyond to ensure Mike had the best care, like he was caring for his own father. Our great thanks as well to Dr.Murphy’s incredible nurses and staff.

And lastly and importantly- the family would like to express sincere appreciation for Mike’s personal caregivers - Richard Freeman and Jesus Zuniga, who helped so much and brought so much joy to Mike’s final years. Thanks also to the caring Assisted Homehealth and Hospice nursing, therapy, and office staff - especially the nurse Jose and aide Gonzalo who helped and supported Mike and the family so kindly.

A funeral service and memorial to celebrate Mike’s life will be held:
January 30, 2023 at 10 am
at Sacred Heart Church,
Ventura, California