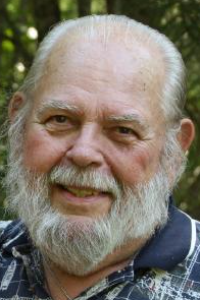 SACO- William T. Harper Jr., age 82, of Saco, US Army Veteran and husband of Susan, passed away early Saturday morning, December 3rd, 2022, after battling various health issues over the last several months.
Bill was born in Washington D.C. and moved to Colorado with his family at a young age. He lived most of his adult life in the Palm Springs area of California and dabbled in multiple careers, including florist, hair dresser, and auto parts salesman, before committing to his one true passion as an auto mechanic.
Bill met his wife, Susie, in Desert Hot Springs, California, where they married in 2000 and lived until 2014 when they moved to Saco, Maine, to be near Susie’s daughter and her family.
Bill is best known for his love of cars and young children. In his last years, nothing made him happier than spending time with his grand-children and great-grand-children. His white hair and full beard made him a double for Santa Claus, and he loved donning his very own furry red suit at Christmas for the children.
Bill is survived by his wife Susie, his step-children, Malaika Picard of Saco, Maine, Aaron Todd, of Washington state, Joe Sosta, of Anaheim, California, and their spouses, Gerard, Katherine, and Rachel, six grand-children, Sara Keller and Christopher Picard, Benjamin and Autumn Todd, and Michael and Ella Sosta, as well as three great-grand-children, Julia, Quinn, and Owen Keller. He is also survived by one brother, Alfredo Harper of Naples, Florida, and sister-in-law Faye Harper.
“Pappy” was well loved and will be dearly missed.
A “Home-going” celebration will be held in his honor on Saturday, December 10th at 2pm at GracePoint Church, located at 329 South Street, Biddeford, Maine.
Funds are being raised to assist with final costs. If you would like to contribute on-line, a GoFundMe account has been established at https://gofund.me/13c6422e.
Online condolence messages can be submitted at the funeral home website, www.mainefuneral.com.

Arrangements have been entrusted to Chad E. Poitras Cremation and Funeral Service, Buxton, www.mainefuneral.com
- Celebrating the Lives of Veterans -