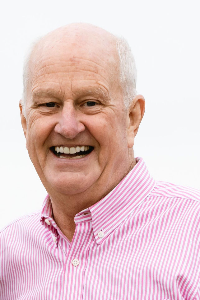 William (Will) Henry Baker, Jr., 71, of New Bedford, and Nonquitt, MA, passed away peacefully, after a battle with cancer, on Sunday, November 20, 2022. He was the loving husband of Deborah von Kelsch Baker for nearly 42 years.

Born in Boston, MA, he was the son of the late Dr. William Henry Baker, and Helen Underwood Baker. Will was raised in Belmont, MA, and attended the Fenn School, Lawrence Academy, Boston University, (where he was captain of the soccer team,) and Duke University. It was while he was in the Physicians Assistant graduate program at Duke University that Will discovered that his academic struggles were as a result of dyslexia. When requesting a lighter course load and extra year to complete the program, he was told that “There is no such thing as Dyslexia; it is a rich man’s term for being lazy.” It was from that experience that Will found the path to his life’s work. He wanted to prove definitively that dyslexia was indeed a condition that could be attended to through research, awareness, and appropriate teaching methods.

Will started his work in the field of dyslexia with the Orton Society, where he and his family’s company (The Underwood Company) helped establish the first Dyslexia Brain Research Lab at the Beth Israel Hospital in Boston, MA. His experience and relationship with Dr. Norman Geschwind and Dr. Albert Galaburda at the Dyslexia Brain Research Lab, would lead to Will leaving his position with the Orton Society, to form the National Dyslexia Research Foundation, now known as The Dyslexia Foundation (TDF).

Under Will’s leadership for over 35 years, TDF brought together more than 150 researchers from various disciplines, inspiring new ideas and new research projects and programs. TDF held conferences both nationally and internationally, helping to advance knowledge of the etiology, diagnosis, treatment of dyslexia and to produce research that could inform and advance policy with regards to dyslexia and other learning differences. The TDF scientific symposia, small think-tank meetings, produced a series of edited volumes and special peer reviewed journal issues to share information more broadly. Researchers were also enlisted to provide research-to-practice information for educators and allied health professionals at special one-day conferences on the east and west coasts of the USA, as well as in other countries. TDF remains the first and leading non-profit organization in the field of dyslexia research. Will mentored and supported the careers of many researchers, and served on the Board of the Haskins Laboratories in New Haven, CT.

Will also enjoyed many other aspects of life, which included being an active member in the following clubs: Rancheros Visitadores (Santa Ynez, CA), The Country Club (Brookline, MA), and The Wamsutta Club (New Bedford, MA). Will and his wife have also been proud Red Sox season ticket holders for over 35 years, continuing to go to as many games as they could this past season. An accomplished social tennis player, Will was a force to be reckoned with on the court. His signature Australian twist serve lead him to victory in the tournaments he participated in both Boca Grande, FL and Nonquitt, MA.

During the summers Will also enjoyed spending time on the water. In the summer, Will would be in high demand as a crew member at the New Bedford Yacht Club during Wednesday Night races. Then some winters, Will would often be found on the slopes enjoying the winter pastime of skiing. Whatever life had to offer, Will would try to explore every aspect of it.

Aside from his hobbies and professional life, Will held another aspect of life dear to his heart -- his family. Will was known to tout and beam with pride the accomplishments of all of his family members. That is why Will made a huge effort to spend as much time as possible with them and their spouses.

Survivors include his wife, Deborah; his children, Deborah von Kelsch Baker, Jr. her husband T. Michael Woolston, Amelia Baker Lauderdale, her husband Christopher Lauderdale, William H. Baker, III and his husband Jeffrey De Leon; and his granddaughter Louise U. Lauderdale. Will was eagerly awaiting the birth of a grandson (Baker-Woolston) in early 2023. He leaves behind his siblings, Richard L. Baker, Cynthia B. Burns, and Carolynn U. Baker; 15 nieces and nephews; and 15 great-nieces and great-nephews.

As part of Will’s wishes, there will be no funeral service, instead the family will be holding a celebration honoring Will in late spring/early summer of 2023. In lieu of flowers, the family requests that donations be made to the Dyslexia Foundation at yesread.org to further his legacy.