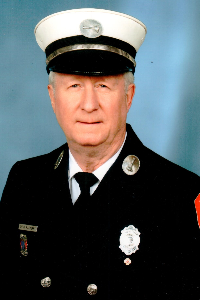 Born in Winchester, Pete was the son of the late Walter J. and Evelyn (Ashby) Skerry. He was raised and educated in Winchester and graduated from Winchester High School with the class of 1968. He attended Essex Agricultural School for tree work and became a certified tree surgeon and arborist. He went to work for the Winchester Cemetery Dept. for several years and also owned and operated “Skerry Landscaping” on the side. He was hired by the Winchester Fire Department in 1978 and graduated from the Massachusetts Firefighters Academy in 1979. He served as a Winchester Firefighter until retiring as Lieutenant in 2014.

In his spare time, Pete liked to spend as much time as possible at his camp on Stanley Pond in South Hiram, ME, where he enjoyed boating, fishing, bonfires, exploring the woods and spending time with family and friends. He also spent time skiing Pat’s Peak in Henniker, NH and was the biggest fan and known as the “#1 Roadie” of his son’s band “Threat Level Burgundy”.

In addition to his wife Kathy, Pete is lovingly survived by his son, Peter M. Skerry, Jr. and his wife Ashley of Chelmsford. He was also the dear brother of Sandra Danehy and her late husband Charles of Billerica, Walter Robert Skerry and his wife Donna of Haverhill and the late Hugh Frederick Skerry. He is further survived by several nieces and nephews. Visiting Hours will be held in the Costello Funeral Home, 177 Washington St., Winchester, on Wednesday, Dec. 7 from 4-8PM. A Funeral Service will be held in the Funeral Home on Thursday, Dec. 8 at 11AM. Relatives and friends are kindly invited to attend. Burial will follow in Wildwood Cemetery, Winchester.