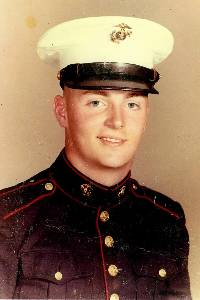 Michael F. "Mike" Keigney, a lifelong resident of Charlestown, entered into eternal life on Friday, December 2, 2022 at the West Roxbury Veteran's Administration Medical Center following a long and courageous battle with cancer. He was 76 years of age.

Mike was born in Boston on June 12, 1946, a son of the late John F. Keigney and Helen (Connolly) Keigney. He grew up in Charlestown where he attended St. Mary's Parochial School, the Clarence R. Edwards Middle School, and graduated from Brighton High School. Mike enlisted into the United States Marine Corps on November 19, 1963 and served his country faithfully and courageously during the Vietnam Conflict. He was discharged on November 17, 1967 with the rank of Sergeant and having been awarded The Purple Heart, Vietnamese Service Medal with 2 Service Stars, Vietnamese Campaign Medal with Device, Good Conduct Medal, and the National Defense Service Medal. Following his military service, Mike worked as a truck driver for several years. He enjoyed spending time with his extended family, walking, and fishing.

Mike is the beloved son of the late John F. Keigney and Helen (Connolly) Keigney. He is the loving brother of Rita Kelly and her late husband Bernie, and the late Jack Keigney and Helen Emberley. He is the dear uncle of Patty and her husband Joe Kelly, Bernie and his wife Anne Kelly, Mary and her husband Gerry Byrnes, and Ed and his wife Christine Kelly. He is also survived by several loving grand-nieces and grand-nephews.

Relatives and friends are invited to attend Mike's visiting hour on Friday morning, December 9, 2022 from 10:30 A.M. to 11:30 A.M. in The Carr Funeral Home, 220 Bunker Hill St. Charlestown, followed by his Funeral Mass in St. Mary's Church, 55 Warren St. Charlestown at 12 Noon. His burial will at Holy Cross Cemetery in Malden.

In lieu of flowers, kindly make a memorial donation in Mike's name to:

The family would like to extend their sincere appreciation and gratitude to the Doctors and Nurses at the V.A. Medical Center in West Roxbury who so compassionately cared for Mike during his illness.