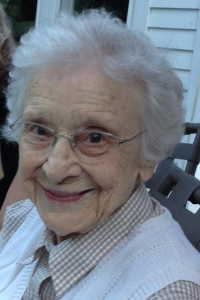 Mystic – Wilhelmina Tupper Gaudy, 101, of Whitehall Pond, died Nov. 30 at her home, attended by loved ones. She was pre-deceased by her husband, William Theodore Gaudy, who died in 2004.
Known as “Mina,” she was a devoted wife and mother who nurtured countless loving relationships with family and friends near and far. She will long be remembered for her unflagging grace, kindness and optimism, as well as for her cheerful smile and characteristically upturned Burberry hat.
Wilhelmina was born on March 25, 1921 at her family home, Oakland, in Stateburg, South Carolina, the daughter of Wilhelmina Dargan and Samuel Yoer Tupper. While she moved often during her life, with her parents and later her husband, she retained a deep love for her native state.
She grew up in Charleston, SC, where her father had a Riding Academy, and in Millbrook, NY and Goshen, KY. In the tradition of her father, who trained and showed American Saddlebred horses, she was a fine rider.
Wilhelmina attended the University of South Carolina and then Hanover College in Indiana. While working as a secretary for the U.S. Air Force in Washington, D.C. she met her husband, an officer in the U.S. Army Medical Service Corps. They were married in 1948.
During her husband’s Army and later civilian career in healthcare and hospital administration, she lived in Silver Spring, MD; Heidelberg, Germany; Fort Dix, NJ and the former Panama Canal Zone. After his retirement they lived in Columbia, SC, and Biloxi, MS and Jackson, MS before moving to Mystic in 1996.
For decades, as long as she was able, she was a volunteer for the Episcopal Church, and since 1996 she was a member of St. Mark’s in Mystic. An avid follower of the news, she took a keen interest in history, and was for 50 years a member of the National Society of the Colonial Dames of America.
She is survived by her daughter Bethe Gaudy Dufresne and son-in-law Marcel P. Dufresne of Old Mystic; nephew Geoffrey Boehm and wife Sharon Boehm; nieces Gail Schwind, Jennifer McGrath and Zeita Jones, and nephew Rick Parker.
The family is grateful for the devotion of caregivers Paulette Dinnall, Veronica Brown and Sandra Cannady.
A memorial service will be held at 1 p.m. Saturday, Jan. 21, at St. Mark’s Episcopal Church in Mystic. In lieu of flowers, gifts in her memory may be made to St. Mark’s Episcopal Church, 15 Pearl St., Mystic CT 06355.