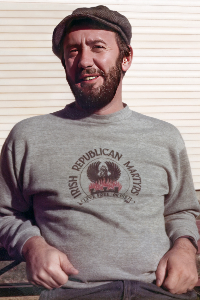 Frank “Franny”McKinney, 80, of Methuen, Massachusetts passed away peacefully surrounded by family on Thanksgiving Day, November 24, 2022. Born in 1942 at Fort Devens just before his father Frank was shipped overseas, his mother Helen brought him back to Greeley, CO where his grandparents taught him German before he learned to speak English. When WWII ended they went to live with his father’s family in Muskogee, OK, and later moved to Lawrence, MA to Valley Street where he grew up. He was very proud to have won an American Legion award when he was in 8th grade, and he graduated from Lawrence High. Drafted into the Army at 22, he served first as an MP, then decided he preferred the Corps of Engineers, and was honorably discharged from Germany in 1966.
He worked several years at Watts Regulator, then Majestic Shoe. He was thrilled when he was hired by Wang Labs, and later spent over 20 years at MKS Instruments until his retirement.
He had his first date with his wife, Christine (Condee) on Christmas Eve 1964, and they spent almost 58 years together. In addition to his wife he is survived by a son, Joseph Vance of Derry, NH and a daughter, Joan Finocchiaro of Lawrence, MA, a brother Garry McKinney and his wife Kathy of Franklin, NC, a brother Larry McKinney and his wife Sandy of Peabody, MA, nieces Greta Condee and Kate Condee of Atkinson, NH, and Nicole McKinney of Gardner, MA, nephews Eric McKinney of Melbourne, FL, Gavin McKinney (deceased), Paul Smith of Peabody, MA, and Christian Battle of Salem, NH and grandchildren Jessica Finocchiaro and her partner John Zebrowski, of Methuen, Julianna (Finocchiaro) Hartt and her wife Katie of Haverhill, Felicia Vance of Derry, NH and great grandchildren Aiden, Emily and Haley also of Derry.
His parents called him “Francis” but mostly he was called “Franny.” He always had a smile on his face, kind and thoughtful, easy going, yet mischievous and playful. Family was everything to him, he took care of his brothers as they were growing up, his teenaged niece, his parents as they aged, his granddaughters when their Mom was ill. He had friends from all cultures and backgrounds, he put others before himself, had no tolerance for anyone who looked down on others. You could always count on him. Children and animals gravitated towards him; he always liked wearing funny T-shirts and hats, and he was a great storyteller, loved to tell jokes.
He hated bullies and would often put himself in between when someone was being picked on; he was a big guy, very tough but a “gentle giant,” challenged often in his younger years but mostly came out the victor. He loved to run and people would marvel at how in shape he was, still bench-pressing weights into his late sixties, and he remained unusually strong for the rest of his life.
He liked all kinds of music, and would start dancing whenever he’d hear a favorite song. A good bowler and a great pool player, he spent a lot of time at the Lawrence “Rec,” and many local pool halls. He was a proud member of the “Valley Eagles,” where he loved to play cards, even getting arrested with some of the members for “Gaming on the Lord’s Day” when the Blue Laws were still in effect! He went to Golden Gloves tournaments and was a pretty good handicapper at Rockingham Park. He was “Best Man” for several of his friends and was always there to help move furniture whenever needed. His favorite movie was “Mean Girls” and he loved Tobey Maguire as “Spider Man.”
He really loved chocolate and a good cup of coffee. And he loved Lebanese food. He saw treasures in everyday things, and proudly displayed all the little trinkets and coins he found on the ground whenever he went walking. He talked about the “old days” with his friends, but stayed up to date and read the “Tribune” every day. He will be greatly missed and remembered by those who were lucky enough to know him.
In lieu of flowers, please donate to the charity of your choice.
Family and Friends are invited to attend visiting hours on Friday, December 9th, 2022 from 4:00 to 7:00 PM at Edgar J.Racicot Inc. Funeral Home, 1400 Broadway Rd (Rte 113), Dracut, MA. Funeral services will begin on Saturday, December 10th with visitation from 10:00 to 11:00 AM. Service will start at 11:00 AM. Burial will be at a later date. Online condolences may be shared at www.racicotfuneralhome.com