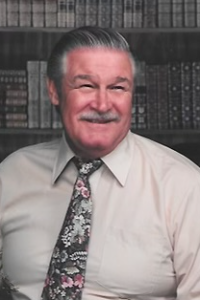 Son of the late Harry A. and Nellie L. Cook. Brother of Gloria Astbury and the late Earl Cook. Former husband to Ruth Cook of Abington. Father of Pamela Howe and her husband Ronald of Abington, George Cook of Abington and his former wife Kathy of Ames, IA, Gary Cook and his wife Maureen of Essex VT, and Kevin Cook and his wife Devin of Seattle WA. Grampy to Jason Cook and his wife Nadia, Justin Cook, Ashleigh Cook, Samantha Cook, Meredith Cook, Mitchell Cook, Victoria Howe, and Christina Howe. Great Grandfather of Trever Kinney and Charlie Chase. He will also be missed by many nieces, nephews, and good friends.

George grew up in Braintree and attended Braintree High School. At the age of 17 George enlisted in the US Marine Corps Reserves. He spent 14 months serving in the Korean War with the 1st Amphibian Tractor Battalion, C Company, 1st Marine Division, where he participated in the Inchon landing, the capture and securing of Seoul, and the Wonsan-Hungnam-Chosin Campaign, becoming one of the Chosin Few. While George never talked much of the war, he was proud to be a Marine and said he “would do it again”. After his service in the Marines, George went on to become a police officer for over 30 years, first in Lakeland, FL and then for most of his career in Abington, MA.

George loved animals and spending time with his family, especially his grandchildren. He loved naps, a good meal, and had a sweet tooth. He could often be found at the local coffee shop enjoying a cup with friends. His favorite place in the world was Maine, where he enjoyed visiting family, hunting with his brother-in-law Clyde, and spending time at the camp he built on Toddy Pond.

Calling hours will be from 10:00-12:00 on Friday, December 9, followed by the funeral service at 12:00, at Blanchard Funeral Chapel, Plymouth Street, Whitman, MA. Interment will be in the Veteran’s lot at Mount Vernon Cemetery in Abington.

In lieu of flowers, please consider making a donation to a veteran’s organization or local animal shelter.