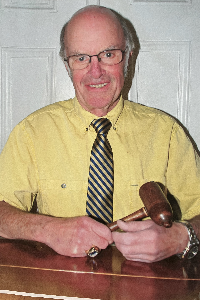 Lee was born on April 9, 1932, in Cambridge, MA, the son of Attorney Arthur and Helen (Johnson) Quimby of Longmeadow, MA.

Mr. Quimby was a NH State Representative, Sandwich Town Moderator and Selectman, Moderator of the Inter-Lakes School District, and a Moderator of the Community Church of Sandwich. In a book released in 2015, he was described as one of the ‘Legends of the Lakes Region’ of NH.

He started a long athletic career as an All-Star basketball player in Braintree, MA and then played on the 1948 Western Massachusetts championship basketball team at Classical High School in Springfield, MA. He was captain of the Classical football team, was selected All-City and All Western MA, and set a new school football scoring record. He was the leading hitter on the Classical baseball team. In the summer, he played baseball for the Sandwich A.C. and was named to the Central NH All-Star team. He was later inducted into the Sports Hall of Fame in Springfield.

After graduating president of his class at Leland Powers School of Radio and Television in Boston, MA, he continued his sports career as a radio and TV sportscaster at New York, Massachusetts, and Maine broadcast stations. He then graduated summa cum laude from the University of Maine. He served as the New England Director of the Citizens’ Scholarship Foundation of America (Dollars for Scholars). Lee owned and managed his own business, Concert Recording Company, from 1967 through 2007. He was also on the Advisory Board of Skrungloo Farm, which provides scholarships and financial aid to various foundations. He was the Master of Ceremonies at more than twenty Memorial Day observances in Sandwich, the Sandwich Historical Society Annual Meetings, and the Quimby High School annual reunions.

Lee is survived by his loving wife of 65 years, Jane (Haywood) Quimby; his daughters, Betsy Richburg and her husband Norman of Dover, NH, and Jennifer Quimby and her husband Jack Dowd of North Conway, NH; his grandchildren, Jeffrey Quimby Jr., Alex McKinney, and Quinn Berube; his great-grandchild, Jackson Lee Quimby; his beloved golden retriever, Jamie, his best friend, Peter Pohl, as well as several nieces and nephews. In addition to his parents, Lee was predeceased by his son, Jeffrey Quimby and his brother, Donald Quimby.

There will be no Calling Hours.

A Memorial Service will be held at a later date at the Methodist Meetinghouse of the Community Church of Sandwich, 6 Main Street, Center Sandwich, NH, 03227.