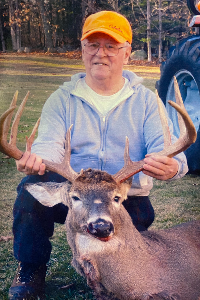 Richard went to several schools in the Lakes Region including Holy Trinity, Gilmanton School, and Belmont High School. Shortly thereafter, he enlisted into 82nd Airborne Division of the Army and was deployed overseas. While completing his service, he received his diploma in 1959. When he returned in 1962, he worked as a toolmaker at New Hampshire Ball Bearings, IPC (Freudenburg) and Webster Valve; retiring from Webster Valve in 1999.

Richard enjoyed being outside and every fall season you would find him out in the woods hunting for deer. Richard loved his animals, particularly his dogs. He trained hunting beagles for many years and, later in life, he loved having his golden retrievers and labs by his side; the latest being Remi and Raven. Richard also enjoyed hanging out at the lake with his family, catching a sports game on TV, watching his children and grandchildren play sports, and tending to his gardens.

Richard is survived by his wife of 47 years, Patricia L. Olisky; three children, Jason R. Olisky and his wife Jen of Sanbornton, Jamie L. (Olisky) Pelletier and her companion Jon Wilson of Sanbornton, and Jeffrey J. Olisky and his companion Stephanie Shepard of Boscawen; sister, Donna Hebert of Belmont; brother, Anthony Olisky of Lakeport; two grandsons, Jackson L. Olisky and Zachary S. Olisky of Epsom; as well as several nieces, nephews, and cousins. In addition to his parents, Richard was predeceased by his brothers, Robert and Steven Olisky, and his stepmother, Bertha (Smith) Olisky.