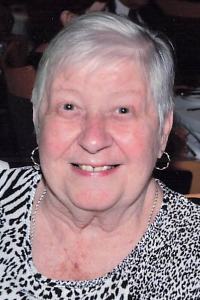 TEWKSBURY Claire Ann Maguire, 86, a longtime resident of both Tewksbury, MA and Woodstock, NH passed away on Saturday, November 26, 2022, with her family by her side, at home in Tewksbury after a brief illness. She was the beloved wife of the late Douglas Maguire with whom she has shared 62 years of marriage.

Claire was born on June 9, 1936 and grew up in Medford. She was a graduate of Medford High School, Class of 1954. She had a career as a medical secretary for Dr. McCartin, of Tewksbury, for over 20 years before her retirement in the early 2000’s.

Claire was a devoted grandmother and great grandmother. Spending time with her grandchildren brought her the greatest joy in life. Claire was an avid golfer and player of the card game “gripe”. She enjoyed her weekly dates with her husband at the Jack O’Lantern Golf Course in Woodstock, NH. Claire was looking forward to her reunion with Doug, we suspect they grabbed an early tee time. In her earlier years, she helped run the children’s bowling league at the former Wamesit Lanes and coached within her daughters' softball league in Tewksbury.

In addition to her grandchildren, great grandchildren and golf, her other passion was cruising with Doug. The two of them experienced the world from the deck of a cruise ship over the course of their marriage and some of her fondest memories were made during that time.

Mom often recalls riding her bicycle past Doug’s house as early as the 3rd grade hoping to grab a glimpse of Doug.

Besides her cherished husband Doug, Claire is survived by her 4 children: Doug Maguire and his partner Sue Ferguson, of Dracut, Debra Layne of Boynton Beach, FL, Diane Daley of Tewksbury, David Maguire and his wife Julie McCormack of Lancaster, her 9 grandchildren and her 9 great grandchildren, her sister Marjorie Anderson of Tewksbury, sister Audrey Wetterwald and her husband, Ed Wetterwald of Chelmsford, sister-in-law Roberta Cooper of Maine, and sister-in-law Brenda Cooper of Indiana.

She was also the sister of the late Kenneth Cooper and Gary Cooper.

A special thank you to Denise Moses, from Extended Family of Lowell LLC, for over 3 years of compassion and assistance to our mother and father.

Claire’s funeral service to be held at Tewksbury Cemetery, located on East Street in Tewksbury, on Saturday December 3rd at 11 AM.