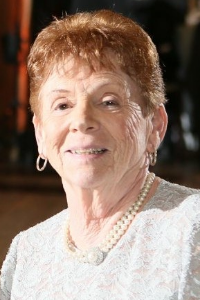 Helene L. McGrail, 85, of Derry, NH, passed away peacefully with her daughter by her side on Tuesday, November 29, 2022, in the Ridgewood Center, Bedford, NH. She was born in Montreal, Canada on October 29, 1937, a daughter of the late Denis and Cecille (Lusignan) Vezina.

Helene grew up in Montreal and came to the United States when she was 20 and started her family in Lynn, MA. She was a strong single parent who devoted her life to her children.

Once her children were grown Helene began her newfound passion of golf, where she excelled and competitively played in several leagues while living in Florida. Her second passion was world travel. She traveled all over the world and took each of her grandchildren on a trip upon their high school graduation. Her final trip was to Machu Picchu, Peru at 77 years old.

She is survived by her son, John Deloury, her daughter, Susan O'Neil and her husband Michael, grandchildren Megan Terkelsen and her husband Dale and Cody O’Neil, and his partner Emily Nguyen. She was predeceased by her husband Thomas McGrail and a brother Gerald Vezina.

Following cremation, calling hours will be held on Friday, December 2, 2022, from 5 -7 pm in the Peabody Funeral Homes and Crematorium, 15 Birch Street Derry. A Catholic prayer service will be offered at 6:30pm in the funeral home. Memorial contributions may be made to the Salem Animal Rescue League 4 Sarl Drive, Salem, NH 03079. To send a condolence or for more information, please visit, www.peabodyfuneralhome.com