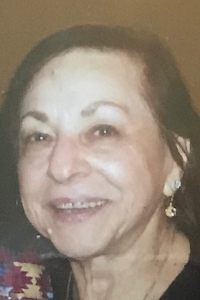 Pearl (Guzelian) LaRosa, 90, of Tewksbury, passed away peacefully at the Blaire House of Tewksbury on Monday, November 21, 2022. She was the widow of Samuel L. LaRosa who passed away in 2002 after 44 years of marriage.

She was born on August 22, 1932 in Boston. She was the daughter of the late Harry and the late Rose (Kouyoumjian) Guzelian. She grew up and was Educated in Milton. She was very dedicated to her faith, and was a longtime member of Saint Stephen's Armenian Apostolic Church in Watertown, and more recently a longtime member of Saint Gregory's Armenian Apostolic Church in North Andover.

For many years she worked for various medical facilities in the Tewksbury area as a medical assistant. She was an avid pet lover and enjoyed knitting and crocheting in her spare time.

In lieu of flowers, donations in her memory may be made to: MSPCA at Nevins Farm, 400 Broadway, Methuen, MA 01844.