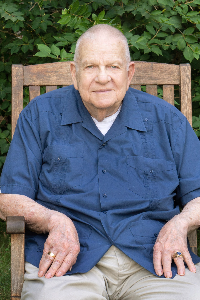 James J. “Jim” LeMahieu, 86, of Concord, NH passed away peacefully Friday November 25, 2022, at the Granite VNA Hospice House in Concord. James was born in Milwaukee, WI on February 23, 1936, a son of the late Harold and Genevieve (Christman) LeMahieu.

Upon completing college at Yale University and serving 4 years in the US Coast Guard, Jim married the love of his life Joan (Sweeny), and settled in Derry, NH as their family grew. He participated in the local government and parks & rec programs (flag football, girls’ basketball). Jim was an avid supporter of the arts programs at both the middle and high school, starting successful support groups for both that continue to exist today. He served for 12 years on the Board of Trustees at Pinkerton Academy beginning in 1980 and serving as Vice President and then President until stepping down in 1991.

After working for more than 25 years at Gorton’s Seafoods of, Gloucester, MA, Jim retired and moved to Texas for the warmer weather with his second wife, Barbara. In 2012, he returned to NH, to live in Concord to be closer to his family and watch his grandchildren grow up.

Following cremation, he will be privately buried with his first wife at the Forest Hill Cemetery, E. Derry, NH in the Spring. A Remembrance Gathering will be held on Saturday, January 14th from 1pm to 4pm at Pinkerton Academy in the Astro Cafe, located in the Freshman Academy Building (refreshments will be served). The Peabody Funeral Homes and Crematorium, 15 Birch St., Derry is assisting the family with arrangements. In lieu of flowers, memorial contributions can be made to the American Legion Post 31, 11 Charles Street, Penacook, NH 03303.