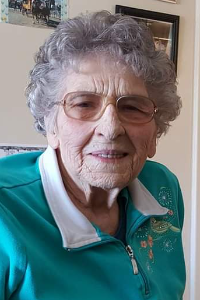 Barbara Jean (Merrill) Evans passed away on November 29th, at Harris Hill Nursing Home, Concord, NH at age 95. Barbara was born in Derry, NH on Sept. 12, 1927 and attended Pinkerton Academy in Derry. She was the 2nd daughter of Joseph Harry Merrill and Mildred (Backman) Merrill. She married her high school sweetheart Robert W. Evans on Jan. 21, 1945, just before he left for military training.

Barbara started taking in small children for day care to earn extra money when her children were small. This endeavor kept expanding to finally having a full-time summer farm. This camp was over night and had up to 60 children there and ran all summer with horseback riding, swimming, archery, riflery, crafts, field trips, games, campfires and great food. She managed all this with raising five children of her own. In later years she enjoyed going to Disney World with grandchildren, as well as going to Amish horse sales in Ohio and PA. Many fun times were spent playing Whist games with family members as well.

Barbara and her husband were very active longtime members of the Londonderry Presbyterian Church. She ran the ladies group at the church, put on suppers at the church for members, and hosted dinners weekly for the pastors. In addition, she sang in the church choir.

Barbara is survived by daughter, Linda (Evans) Misiaszek of the Villages in FL and sons Gary Evans of Weare, NH, Gregg Evans of Manchester, NH, and Troy Evans of Salem, NH. She is predeceased by her husband, Robert in 2014, son Kenneth Evans in 2020, and her siblings Dorothy White, Richard Merrill and Robert Merrill.

Barbara was a descendent of Nathaniel Merrill who came from Wherstead England to Newbury Mass in the 1600s, as well as Heinrich Stief who came to New Brunswick from Ohnastetten Germany in 1747, and Johann Baptiste Bachmann who came to Nova Scotia in 1752 from Bayern-Pfalz Germany.

Barbara will be buried privately next to her husband in Pleasant View Cemetery in Londonderry. The Peabody Funeral Homes and Crematorium of Derry and Londonderry is assisting the family with arrangements.