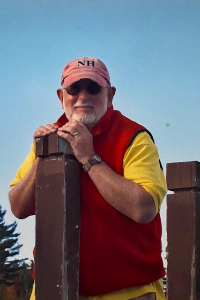 LACONIA ---- Peter Ingve Cassell, 80, of South Down Shores, passed away on Sunday, November 20, 2022, at his home surrounded by family, after a 2-year battle with sarcoma.

Peter was born on April 21, 1942, in New Rochelle, NY. He was the son of the late Carl and Lucile (Anderson) Cassell. He moved to West Palm Beach, FL, at age 2. He met his future wife, Veronica (Connie) Morkert, in junior high school, and they married on August 25, 1962. They raised their family in Palm Beach Gardens, FL, moving to Andover, MA in July 1975, and to Laconia in November 1998.

Peter graduated from Davidson College in 1962 with a Bachelor’s Degree in English, where he was a brother of the Sigma Chi fraternity. He worked as a computer analyst and programmer during his working years. He proudly attained the rank of colonel in the US Army Reserves, retiring after 30 years of service.
Over his lifetime, Peter volunteered for many groups and served on several committees. He worked with the Trauma Intervention Program in Andover, and after moving to Laconia, he volunteered with the Got Lunch Program, was a co-developer of the We Honor Veterans Program, and was a hospice volunteer with Granite VNA. He also held various positions on multiple committees in South Down Shores. Peter loved his community and wanted to give back as much as he could.

Peter loved boats, both sailboats and power boats. He and Connie made several sailing trips to the Virgin Islands with friends. He also enjoyed boating on Lake Winnipesaukee, and often enjoyed spending an afternoon moored in a small cove on the Lake, just relaxing. Peter also loved music and singing. From singing in church choirs to Barbershop choruses or quartets, he always had a song in his heart.

Peter was predeceased by his parents, Carl Ingve and Lucile (Anderson) Cassell, and his wife of 50 years, Veronica (Morkert) Cassell. He is survived by his daughter Melanie (Cassell) Prugh, her husband Duane Prugh, Jr., their children Ashley (Prugh) Rosa and Geoffrey Prugh of Methuen and North Andover, MA; daughter Tracy Cassell, of Stoughton, MA; sister Susan (Cassell) Everson, and her husband John, of Vonore, TN; brother-in-law Terrence Morkert, and his wife Stephanie, of Boca Raton, FL; and many nieces, nephews, great-nieces, and great-nephews.

Per Peter’s wishes, there will be no calling hours.

A private family burial will be held at a later date at the New Hampshire State Veterans Cemetery, Boscawen, NH.

A Celebration of Life gathering will be held, as well.

In lieu of flowers, for those who wish, the family suggests memorial donations in Peter’s name be made to the New Hampshire Humane Society, NHHumane.org, or the Granite VNA, granitevna.org.