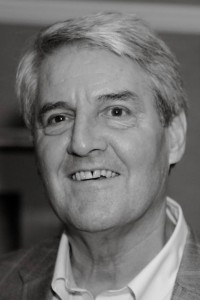 Kenneth Leahy, 79, of Wellesley, died peacefully on November 26 after a long battle with Alzheimer’s disease.

Ken was born in Boston, and spent his early life in South Boston and Quincy. Son of Rita Stern Leahy and Edward Leahy, both deceased, and the brother of Paula Leahy, also deceased, Ken was the beloved husband of Carol A. (McCarthy) Leahy, with whom he shared 54 years of marriage. He was a 1961 graduate of Archbishop Williams High School, earned his BA in Economics from Stonehill College in 1965, and his MBA from Babson College in 1967.

Ken spent his entire career of over 40 years in the educational printing and publishing industry where he was well known and respected. He was employed by Ginn & Company, Lehigh Press Inc., and Houghton Mifflin.

Ken was a lover of people. As much as he loved to talk for hours with friends, Ken never shied away from a conversation with a stranger, an opportunity to make a new friend. Those around him were lucky to hear one of his good (or bad) jokes. Ken’s grandchildren could always count on him to make his famous “Papa-corn” and never miss their sporting events or concerts, constantly boasting to anyone who would listen about how handsome his grandsons were or how beautiful his granddaughters were. His family was his priority, and his most cherished moments were spent at the head of a crammed table for a meal or a holiday.

He is survived by his wife, Carol, his three children: Stephen and his wife Lauren Leahy of Sherborn, MA; Gillian Leahy Jervis of Locust Valley, NY; Andrew Leahy of Washington, D.C; and his nine grandchildren: Alex, Caroline, and Anna Leahy; Henry, Jack, Lucy, and Peter Jervis; and Frances and Thomas Leahy. He was also the devoted uncle of Geoffrey and Jonathan Speare; Gregory and the late Elizabeth McCarthy. He also leaves his grand nieces and nephews: Olin, Elliott, Kate, Maren, and Bharat.

His family extends heartfelt gratitude to the staff at Rogerson House in Jamaica Plain, where Ken resided for the last two years, and to members of the Hospice of the Good Shepherd. Special thanks to his lead caregiver, Donna, his lunch pal, “Red”, and all the dedicated staff and hospice members who patiently and compassionately cared for Ken and his fellow residents.

A funeral Mass will be held at St. Paul’s Church, 502 Washington St., Wellesley on Friday, December 2nd, at 10:00 am. In lieu of flowers, donations in Ken’s memory can be made to Rogerson House (www.rogersonhouse.org).