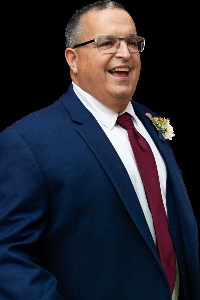 Robert Francis Duclos Jr., 60, of Groton passed away Sunday, November 27,2022 at W.W. Backus Hospital in Norwich, CT after a battle with cancer and other illnesses.

Robert was born on February 7th 1962 to Donna and Robert Duclos Sr. in Westerly, RI. In 1984, Robert married his wife of 38 years, Danielle (Leger) Duclos. Robert and Danielle went on to have two daughters.

Robert worked as a butcher for over 40 years at various local grocery stores. After retiring due to injuries, he worked security jobs at both the Olde Mistick Village and Waterford Speedbowl. He loved taking car rides to New Hampshire, fishing, going to the Waterford Speedbowl and spending time with his four young granddaughters.

Robert was predeceased by his father Robert Duclos Sr., his mother and father in law Janeth and Kenneth Leger Sr., and his sister-in-law Lynn Leger Cousens. He is survived by his wife Danielle and their daughters Stephanie and her husband Brian Pochal and Brittany and her husband Nicholas de la Cruz, as well as his four granddaughters Kamryn, Raegan, Payton and Jordyn. He is also survived by his mother, Donna Duclos and his sisters Terry Montgomery and Nina Bennett and several brother and sister in laws and numerous nieces and nephews.

A Funeral Mass will be celebrated on Friday, December 9, at 10:00am at St. Patrick Church, 32 East Main Street, Mystic. A Committal Service will follow the mass in St. Patrick Cemetery, River Road, Mystic. The Dinoto Funeral Home in Mystic is assisting the family.