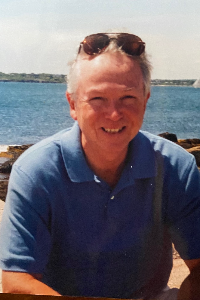 Born in Boston, Massachusetts in 1949, he was the oldest son of Albert F. Regele Sr. and Mary (Sullivan) Regele.
He grew up in North Quincy and after graduating from North Quincy High in 1969 he went on to Northeastern University where he received his MBA in Business. After graduation, he worked as a stockbroker at Gordon & Co. in Newton, Massachusetts, for over 30 years.

He was the loving husband of Gay (Bergeron) Regele of Marshfield, loving father of Kristen (Regele) Murphy and her husband Tim of Duxbury, and grandfather (Grampy) to Braden and Ainsley of Duxbury. He is survived by his younger brother, Peter Regele, and sisters Ellen and Susan Regele, all of North Quincy, Massachusetts. Also survived by brothers-in-law and sisters-in-law, Ken and Mary Bergeron of Hanson, Massachusetts, and Chris and Kathy Kane of Marshfield, Massachusetts, along with many nieces and nephews.

Al was a kind and friendly man whose greatest joy was his family. During his illness, he loved taking rides down by the beach and watching his favorite New England sports teams. He will be sorely missed by all.

Family and friends are invited to attend his visiting hours on Wednesday December 7 from 10 AM – 12 PM with a service to follow at 12:00 PM in the Blanchard Funeral Chapel, Plymouth Street (Rte. 58 @ the rotary) Whitman. A private burial will be held at a later date.