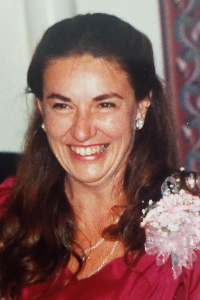 GILMANTON --- Let me tell you a love story. Janette C. Stevens was born in North Canaan, CT. She was the daughter of a dairy farmer named Lawrence Makepeace Stevens. Her mother, Dorothy Janette Stevens (Bentley) passed away when Janette was only 3 years old. Her dad remarried and Janette and the new step mom did not get along. Janette ended up living with several great aunts and a family who wanted to adopt her. She spent her high school years in a little town in western MA on a small farm with her Aunt Pearl.

Janette was always artistic and loved style and fashion. She became a ramp model for G. Fox and Co. in Hartford, CT. It was in Hartford that she met and fell in love with Allen E. Richardson, who was fresh out of the US Army and living with his aunt and uncle. Janette’s roommate Cindy knew Janette loved music and took her to the Aunt’s house to watch Alice play the organ. Janette was listening to the music when Allen came trotting downstairs to join in. It was love at first sight for both of them. They quickly grew to know each other always having much to talk about. Allen also had been raised without a parent, his dad. Allen impressed Janette by taking her flying in his own little plane. He literally swept her off her feet, in an airplane. The happy couple married at Janette’s aunt’s house in western MA. Allen’s city buddies were shocked that it was a dry wedding as Janette’s Aunt Pearl was a teetotaler. They spent their honeymoon in a cabin in Maine with Allen hiding under the covers from the bat that was dive bombing him and Janette had food poisoning.

The next year they became the proud parents of a little girl whom they named Robin. While Robin was young, Janette was mostly a homemaker, but held jobs as an Avon Lady and worked at a Hallmark Store in CT. They lived in Storrs, CT during the winter and in NH during the summers while they owned and operated Sky Tours - a seaplane ride tourist attraction. They also taught water skiing and rented Sunfish sailboats on Paugus Bay.

In NH, Janette worked for Anna Lee Dolls and then became a Real Estate agent until she went to work with Allen full time helping him run his business Aeroweld, Inc. an aircraft component manufacturer.

Janette and Allen made up for a substandard honeymoon many times over as they became world travelers, staying in a castle in Ireland, visiting friends in Germany, soaking up the rays in the Florida Keys, Tortola BVI, and Kauai, HI.

They were always happy and grateful to return to their beautiful little home on the north end of Lake Winnisquam that they loved and shared for 50 years. The state land across the bay was picturesque and they enjoyed many summer evenings together watching the colors of the sunset paint the still water of the bay and listening to the sounds of the wild, especially the loons. Janette was known to many as the “Loon Lady” and both Allen and Janette were instrumental in establishing the Loon Sanctuary at the north end of Lake Winnisquam. Janette would proudly display her orange Loon Volunteer sign on the side of her canoe and paddle around visiting the many boats anchored in the bay and educating folks about the Loons. They also hosted many parties for their friends and took them water skiing and sailing.

Janette and Al were members of the Winnipesaukee Yacht Club and the proud owners of their sailboat named Shadow. Janette preferred the lighter wind days so she could visit and entertain whereas Al preferred white cap days when the wind tipped the boat dangerously and he grinned like a kid as the spray blew over the deck and splashed his face.

Janette enjoyed dining out especially at Fratello’s where she and Al visited with friends and listened to Duke playing the piano.

Janette lost her soulmate Allen last year. She lived with her daughter Robin in Gilmanton, NH and enjoyed watching the woodland creatures, but it just wasn’t the same as life on the lake with Al.

Janette was a Tour De Force until the end. She was a tough lady with a lot of class, style and artistic flair. She bravely endured the crippling pain of Psoriatic Arthritis and chronic UTIs but still drove her Corvette convertible with her handicap tag up until this summer. She always said “If you don’t have good legs, you have to have good wheels”. She enjoyed a grand scale party and loved planning them. There always had to be bad weather for her parties but no one dared to not show because of all the planning and grandeur that went into them. She always set a nice table; wrapped gifts beautifully, loved to dance, arrange flowers, decorate the Christmas tree, believed in conserving nature, and loved her family.

Janette passed away the morning after Al’s birthday at Concord Hospital, Concord. She is probably having a belated party for him in Heaven and they are together again for eternity.

A casual and friendly Celebration of Life gathering will follow at Hart’s Turkey Farm Restaurant in Meredith.