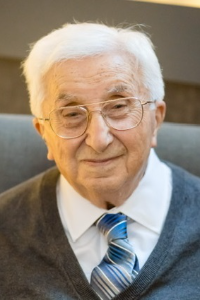 Generoso R. DiChiara, a decorated WWII United States Army Veteran, of Woburn formerly of Burlington and Medford, passed away peacefully Friday, November 25, 2022 at the E.N. Rogers Memorial Veterans Hospital in Bedford, following a brief illness. He was the beloved husband of the late Gilda E. (Marotta) DiChiara. Born in East Boston he was one of five children of the late Giuseppe and Antonetta (Zizza) DiChiara.


"Jerry", as he was affectionately known to family and friends, was raised and educated in Boston and was a graduate of Boston English High School. In 1943 he entered the United States Army and honorably served with the 88th Infantry Division. Seeing action in Italy he was awarded the Bronze Star for heroism and was a recipient of the Purple Heart. He was field promoted in 1945 to the rank of 2nd Lieutenant. In January of 1946 he was relieved from active duty and returned home. He married his beloved wife Gilda in 1948 and together they shared 61 years of marriage prior to her passing in 2009.


Jerry worked for many years in the Garment Industry as a talented clothe cutter and designer. He retired in 1990. A devoted husband, father and grandfather, nothing made Jerry happier than to be surrounded by those he loved. He was always looking forward to the next family celebration, event or get together. He will truly be missed.


Jerry's family would like to extend their sincere gratitude to the doctors, nurses and staff of the E. N. Rogers Memorial Veterans Hospital for the extraordinary care, respect and dignity shown to their father during his time there. They would especially want to thank the staff of unit 62D.


Funeral from the McLaughlin - Dello Russo Family Funeral Home, 60 Pleasant St., Woburn, Thursday, December 1st, at 9 a.m. followed by a funeral Mass celebrated in St. Barbara Church, 138 Cambridge Rd. Woburn at 10 a.m. Relatives and friends are respectfully invited to attend. Visiting hours will be held on Wednesday, from 4 to 8 p.m. Services will conclude with military honors and burial at Oak Grove Cemetery, Medford. It has been requested that in lieu of flowers contributions may be made to the Bedford VA-Voluntary services #135,200 Springs Rd., Bedford, MA 01730, memo line Unit 62 D In memory of Generoso DiChiara.