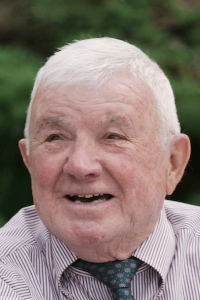 
CAIN, PHILIP ARTHUR formerly of Belmont and Harwich, MA died peacefully with hospice and his family in Vero Beach, FL on November 19, 2022.

Philip, age 91, was predeceased by his wife of 60 years, Mary and by five siblings. He is survived by one sister, Pauline Tucci of Winchester, MA and one brother, Jay E. Cain of Delray Beach, FL. Philip is also survived by his children Kevin Cain and his wife Heidi of Halifax, MA, Mary Beth Palladino and her husband Robert M. Palladino of Belmont, MA, and Mark Cain of Vero Beach, FL. Philip leaves behind three grandchildren, Christina M. Palladino Smith and her husband Shawn of Eagan, MN, Robert F. Palladino and his wife Hope of Larchmont, NY, and Zachary Cain of Halifax, MA, as well as four great grandchildren, Waverly and Bellamy Smith of Eagan, MN, Robert Benton and Isabella Palladino of Larchmont, NY. He leaves behind countless nieces, nephews, grandnieces and grandnephews.

Philip was a graduate of St. John’s High School in Cambridge and Boston College and a veteran of the Korean War. He was a successful career finance executive until his retirement. He was active in Belmont Youth Soccer, Little League, Boy Scouts, Booster Club and St. Joseph Church. He cherished his time spent with family, watching his beloved Boston College athletic teams and Boston sports.

At the family’s request, visiting hours are omitted. There will be a Memorial Service at a later date to be announced.

In lieu of flowers, the family would appreciate donations in Philip’s name to the VNA & Hospice Foundation of Vero Beach, FL.