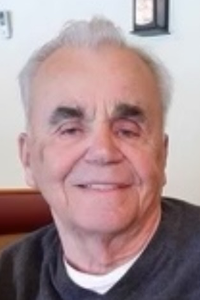 Richard J. White, Sr., age 87, of Taunton, formerly of Norton, passed away peacefully on Monday, November 28, 2022 at the Morton Hospital in Taunton. He was the husband of the late Irene J. (Ivanoski) White and the longtime companion of Rhoda Berube, with whom he made his home.

Richard grew up in the Roxbury neighborhood of Boston and was educated in Boston Public Schools. During the Korean War, he proudly served his country in the United States Navy aboard the USS New Jersey and was the recipient of several medals of accommodation.

A resident of Taunton for the past thirty-six years, Mr. White was a retired professional painter for the City of Boston Housing Authority. He had the ability to fix just about anything and also worked as a plumber. Following retirement, Richard worked as a deliveryman at the Lighting Gallery in Taunton.

Along with his family, whom he loved spending time with, Richard was a communicant of Saint Mary’s Church in Norton. He was an avid golfer and his other hobbies included playing cribbage, cards, spending time on the computer and a “sweet tooth” for scratch tickets.

In addition to his companion Rhoda, he is survived by his devoted children: Deborah A. White-Jewell and her husband Michael of Norton, Richard J. White, Jr. and his wife Michelle of North Attleboro, Joseph A. White of Taunton and Phillip F. White of Somerset. He was the cherished grandfather of Colleen, Jennifer, Kristen, Matthew, Michael and the great grandfather of Corey. He was the dear brother of John Litterio, Rosemarie Deltufo, Thomas Litterio, Anne O’Hara, Robert Litterio, Joan Litterio, Mary Masker and the late Vivian Litterio, Theresa Figaratto, Joseph Litterio, Salvatore Litterio, Paul Litterio and Madeline Collins. He is also survived by many loving nieces and nephews.

His Funeral Mass, to which relatives and friends are cordially invited to attend, will be celebrated on Saturday, December 17th at 10:00 A.M. in Saint Mary’s Church, 1 Power Street, Norton. Burial will be private.

Visiting hours are omitted and in lieu of flowers, Richard’s family has requested that donations in his memory be made to Compassionate Care Hospice, 100 Myles Standish Blvd, Taunton, MA 02780 or the Lustgarten Foundation, 415 Crossways Park Drive D, Woodbury, NY 11797.