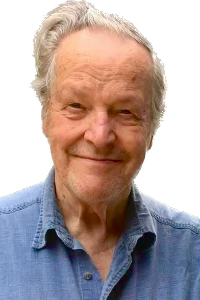 Born on September 2, 1936, to the late Raymond and Lucy Bossey (Horner). Don lived his early years in Lincoln, NH.

Don was a multi-talented man. He served as a Lance Corporal in the 18th rifle company United States Marine Corps Reserves. He was also employed at Manter Oldsmobile Pontiac as an Auto Body Shop Foreman for forty years, where he made many lifelong friends. In the late 70’s, Don built his own house on New Hope Drive, Laconia, where he planted many fruit trees, Christmas trees, and always had a big successful vegetable garden. In his early retirement he worked with his sons and grandsons building houses. Don enjoyed traveling with his wife, Fran. They frequently visited his brother Sonny, and his wife Nina, in Arizona. Together, the couples traveled extensively, including trips to Hawaii, taking cruises to Alaska and the Panama Canal, and going on many other excursions. One of his fondest memories was when he drove his family on a cross country trip from New Hampshire to Arizona, Oregon, and Minnesota. They visited family and stopped at many National Parks along the way. Don built and fixed many things in his life but was most proud of the family and life he built with his beloved wife Fran.

Donald was a family man in every sense. He shared 66 years of devotion, love, and laughter with his wife, Frances. He was also a loving and incredible father and role model to his children, grandchildren, and great grandchildren, who brought him immense pride and joy.