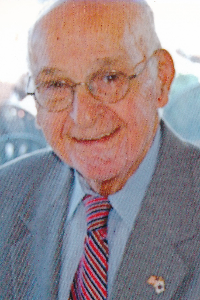 Ara Manoogian, 94 of Whitman, Massachusetts died on November 26 after a brief period of failing health. He was born in Connecticut in 1928, the son of the late Krikor and Satenig Manoogian.

Ara was a proud Veteran of the U.S. Navy and served overseas during his enlistment.

He was employed by Paramount Rug Company for over 50 years and retired at the age of 90.

He was a Masonic member of Puritan Lodge A.F. & A.M. since 1950 and served as District Deputy Grand Master from 1977-1978. He was awarded his 50 year Past Master award in May 2015 and the prestigious Joseph Warren award in December of 1992 as well as the Veterans Medal in May 2000. He had served as a Grand Lecturer for the Grand Lodge of Boston where he travelled across the state speaking to other lodges. He was also a member of the Scottish Rite Valley of Boston where he directed degrees.

Ara enjoyed having breakfast with his Masonic friends at Millie’s Lunch in Whitman.

He was actively involved with the United Methodist Church of Whitman.

He is survived by his daughter, Diana and her husband, Alan Marcotte of Billerica. He was the proud Papa to his granddaughter, Samantha. He is also survived by his brother-in-law Gary Tavitian of Whitman and several nieces and nephews.

The family would like to thank Helle, Danielle, John & Tamika from the Brockton Visiting Nurse Association for their caring & kindness.

In lieu of flowers donations may be made in Ara’s name to the Boys & Girls Club of Greater Billerica, 19 Campbell Rd, Billerica MA, 01821 (www.billericabgc.com).