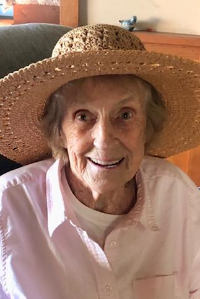 BALDWIN- Marcia Fernald (small but mighty) age 97 passed away peacefully on Saturday, November 19, 2022, at her home in West Baldwin. She was born July 15, 1925, in Portland to James and Annie (Plummer) Hughes.
As written by Marcia…..
I attended Portland schools and at the age of 13 I went to work taking care of children and doing housework, following I went to work for Shaw’s for many years and after I retired I went to work for 26 years house cleaning in the Portland area and enjoyed what I did.
I met my husband Gilbert Fernald, and had three children Gilbert, Anita, and Fredrick.
Gilbert and I had a love for ballroom dancing together and traveled around Maine teaching ballroom dancing.
Later in years after the passing of Gilbert, I met Walter Flint Sr, where for 32 years I spent time in the many flower and vegetable gardens.
I’m survived by Anita & Lawrence, Fredrick & Victoria, and a number of grandchildren and great grandchildren and a very special daughter in-law Joan Fernald and grand daughter Brenda, and I must say some of the best caring people in the world who took complete care of me and my needs -Angela and Mike Breton.
I was predeceased by my Father, Mother, sisters Shirley, Virgin, Lois, Brother James Hughes, husband Gilbert, son Gilbert Jr and Walter Flint Sr.