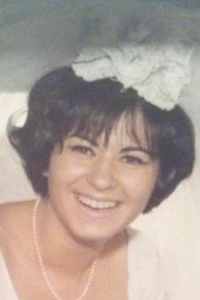 Irene of Worcester, MA, passed away on Thanksgiving Day of November 24th at home with her loving family by her side. She is survived by her husband of 57 years, Sotirios Ganias, her daughter, Louisa Ganias and long time companion, Joseph. Her son Chris Ganias and his long time companion, Karen. Her brother, William Ziogas and his wife, Irene of Worcester. Her sister, Aphrodite of St. Petersburg, FL. Her two granddaughters Brianna McCune and her husband, David of Jupiter, FL and Nichole Carter of Worcester and four great-grandchildren, Julius, Ethan, Elle and Cash. Irene is greeted in heaven by her sisters and brothers Sophia, Maria, Diane, George and Angelo.

She was born in Konitsa, Greece, the daughter of John and Vasilki (Dangas) Ziogas. Irene worked as a waitress and owned and operated several restaurants with her family before opening Villa Beauty Salon which she ran for many years. She was a longtime member of St. Spyridon Greek Orthodox Cathedral and will be remembered for her love of Greek cooking. Her greatest joy was the time spent with her family, especially her grandchildren and great-grandchildren. Family was the most important aspect of her life and meant everything to her.