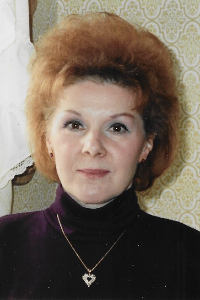 Stella was born in Kadzidlo, Poland in 1937. She had fond memories of her grandparents and life on the farm, except for a short German occupation of it. She came to the United States with her sister Mary in 1947. She lived in Dorchester, danced in the Polish Krakowianki Group, and attended Boston Schools. Sometime later the family moved to Hartford, CT.

She met her husband Stanley at various functions in Hartford until he served in the U.S. Army in West Berlin. After his discharge they married in 1959 and lived in Dedham until now. Her greatest happiness in life was enjoying her family and relatives.

Visiting hours will be held at the George F. Doherty & Sons Wilson-Cannon Funeral Home, 456 High St., Dedham on Saturday, Dec. 3 from 9:00-10:15am followed by a Funeral Mass in St. Mary’s Church, Dedham at 10:30am. Relatives and friends kindly invited. Interment in Brookdale Cemetery, Dedham.