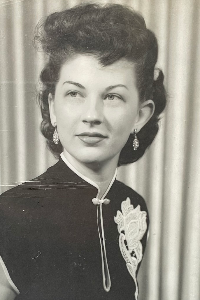 PANICO, Florence "Bette" Of Dedham, passed away peacefully at home on Wednesday, November 23, 2022 surrounded by family. She was the wife of the late Louis Panico with whom she shared 62 years of marriage.

Born on February 9, 1930 to the late Margaret and Benjamin Schnetzer in Boston. Bette was the sister of the late Bertram, Anne, Gerard and Thomas.

Bette is survived by her children, Richard Panico and his wife Terri of North Attleboro, Lois Fedorczyk and her husband Joe of Myrtle Beach, Joseph Panico of Dedham and Jayne Coscia of Rockland as well as her dear niece Anne Louise Cabral of Plymouth with whom she shared a special bond. Also surviving are her grandchildren Michael, Matthew, Jeffrey, Amanda, Rachel and Julia along with her great grandchildren Nolan, Reese and Ryan.

Bette and Lou made their home in Dedham where they raised their family. Her greatest pride was being a mother to her four children, and grandmother to her grandchildren all of whom she took care of when they were young. She was steadfast in her unwavering devotion to her family. She was a homemaker and daycare provider for numerous babies and young children for many years who were like family to her.

Bette was diagnosed with Alzheimer's in 2015 and was provided excellent loving home care from both her son Joseph and daughter Lois.

Services to be held privately. Donations can be made in her name to the Alzheimer's Foundation, 309 Waverley Oaks Rd., Waltham, MA 02452.