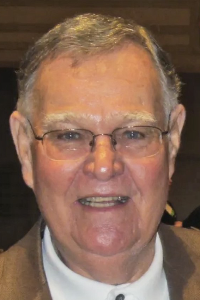 Karl Clemmey, age 83, of Mansfield and Onset, passed away peacefully, surrounded by his loving family on Tuesday, Nov. 22, 2022.

Karl was born on Church St. and lived there for the first part of his youth. The family later moved to South Main St. where Karl grew up with his four brothers, Jimmy, David, Drew, and John (Jocko). Karl lived on a farm where they raised sheep, cows, roosters and horses. Karl’s fondest memories are of growing up in Mansfield, attending Mansfield High (Class of 1958), and, perhaps, being involved in some hi-jinx with his buddies Donny, Red, Bobby, Bart, John and many other townies! He knew everyone and everyone knew Karl. It is just the way it was back then in Mansfield.

Karl also spent the summers of his youth with his family in Onset, where Karl met his future wife Carole Clemmey (Sturgis). Karl’s first home with Carole was on West Church St. then the family moved to Spring St. and they finally settled on South Main St. with their four children, Karl Jr., Elizabeth, Michael, and William. Karl was married to Carole for over 60 years and was heartbroken upon her passing in 2020.

Karl and Carole continued to enjoy many years in Onset at their summer homes on Whittemore’s Point and later in life at Burgess Point. Karl loved spending family time with Carole, their kids and especially the grand kids during the summers. Popop, “Thanks for the memories!”

Karl had a love of horses since he was a child and discovered most of the town while riding his horses. He owned, rode, and bred many horses through the years including Cornelius, his favorite Arabian horse and Peaches, a beautiful black Belgian Shire. Karl enjoyed spending time with his horses whether it was a casual trail ride, pulling one of his wagons in a Town parade or attending many local and national Equestrian competitions.

Karl was also a well-known antique car collector. His knowledge and appreciation of vintage cars and automobiles started in his youth and continued throughout his life. He enjoyed working on his cars and restoring them to their past glory. He always told people “You can drive my cars from here to California.”

But Karl’s passion was his work; a true entrepreneur with humble beginnings on North Main St. to his beautiful shopping plaza on West St. A close friend recently said “Karl became a very successful businessman because he was a hard worker, he was intelligent, he was fearless, he was tough, and willing to take the required chances in order to succeed. Nothing was given to him.”

In 1961, Karl started his long and prosperous business in Mansfield. When he started, he had himself, a small auto shop, and big dreams. In 1967, Karl moved his business to North Main St. and expanded into the towing business for both the local and State police. He also started to purchase land around town. In 1970, Karl moved his business to Copeland Drive and further expands into the auto parts business. He would later develop this site into what is now Wendy's. In 1973, Karl incorporates and forms Clemmey Inc. In 1974, Karl again moves his operations to West St. where he continued to grow his auto business while starting to expand his Real Estate holdings.

In the late 1990s, Karl develops land on Cobb St. into Willow Crossing, a premier retirement community that still serves the community today. In the early 2000s, Karl creates Rumford, LLC and Foundry, LLC to operate commercial parking lots. Karl bought back the Foundry property next to the Mansfield Train station. This property is where his family first started doing business in Mansfield as Clemmey Tank back in the 1930s where Karl had his first job at the age of 14.

Karl was now running a Commercial Real Estate Company that had purchased, developed and managed many properties throughout Town. In 2003, as owner of Clemco, LLC, Karl develops his crowning achievement; Erin’s Center, a Retail plaza that serves Mansfield and surrounding communities.

Karl understood that business required education and licensing. He held both a Class II and Class III Auto License for over 60 years, an Auto Repair Shop License, an Auto Appraisers License, a CDL driver’s license and a Mass. Auctioneer license. Karl was a licensed Real Estate Broker and Notary Public for over 50 years and held a Supervisor Construction License for 37 years. Upon his passing, every single license Karl had was still active.

And while Karl was focused on growing his own business, he also devoted significant time and effort to help grow the Town of Mansfield. Karl was a member of the Financial Industrial Development Committee (FIDC) from 1968 to 1972, a member of the Board of Health from 1973 to 1979 when most of the current Health codes were created, a member of the Industrial Development Committee from 1980 to 1985 when Cabot Cabot & Forbes Industrial Park was growing, and a member of the Zoning Board of Appeals from 1990 to 1993. Karl also spent significant time with the Planning Board and Town Master Plan committees to create most of the current zoning in Town. He, himself wrote, presented, and passed many Zoning Articles at Town Meeting. Karl did not miss a single town meeting and he was always part of the debate!

Karl was also involved in many civic organizations over the years including a founding member of the Mansfield Elks, the Mansfield Rotary, and the Tri Town Chamber of Commerce. But Karl’s favorite civic organization was The Hundred Club of Massachusetts. An organization whose motto is “We serve those who serve us.” They provide support for the families of fallen Police and Fire personnel. In fact, Karl was featured in their Newsletter recently for being a member for over 47 years and providing ongoing support to the organization.

Karl sponsored and supported almost every Town Sport through the years and was instrumental in starting Mansfield Youth Hockey. He was always willing to help those kids who wanted to play, but could not afford to. He created the Karl Clemmey Scholarship Fund to provide aid to Mansfield High School students for college. He provided ongoing support to Mercymount Country Day where many of his grand children attended, Bishop Feehan high School, Sisters of Mary Bayview High School, St. Vincent DePaul, the US Special Olympics, and the United Way and other charities. He was always there to help those in need.