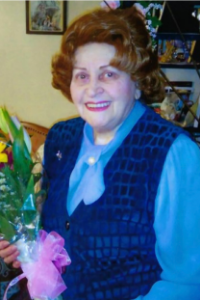 Anoosh Andrias Ghoukasian Khaze, faced her final moments on Thursday, November 10th, 2022, at her home in Northridge, California in the company of her family, just over a month after her 100th birthday.

Born in Tabriz, Iran in 1922 to her parents Armenak and Oskouhi, Anoosh was the last of their children to leave this world. She had two brothers - Sergo and Ciren - and two sisters, Arpik and Jenia.

She and her late husband, Shohood, met in Tehran Iran, where they were married, and had one son - Anoushiravan Khaze.

She and her son left Iran for Belmont Massachusetts in 1976 and shortly thereafter she opened her own business “Sunshine Giftshop” in Belmont, Massachusetts. In 1979, after the revolution in Iran, she was joined by her late husband and they opened a small local market, “Royal Food Products”, and worked many long hours beside each other. After Shohood passed away in 1998, she continued living in Belmont and volunteered at the local church Sunday school and daycare as an art teacher.
She moved to California in 2018 to join her son, his wife, Yelena, and her grandchildren: Victor, Victoria, and Vigen.

She was a talented and skilled woman with many talents in art & crafts, sewing music and even basic electrical wiring. She saw the rise and fall of the third Reich, the establishment of the UN, the Anglo-Soviet invasion of Iran, the fall of the Shah, mankind landing on the moon, the rise of the information age, 9/11, the first black president, and so, so much more.
She died sharp as a tack, fully mobile, and by all rights as independent as she ever was. She always had a knowingness about her, and she made sure she was understood, which was easy because she spoke five languages.

Anoosh spent her life as an example of generosity and grace. She had a sharp wit and a keen sense of humor, often able to cut to the heart of situations and keep perspective when other had lost it. Her friends and family were always at the forefront of her mind, and she exemplified being a good hostess, always having a cache of cookies or pastry for whenever they visited.

Anoosh is survived by her son, Anoushiravan; his wife, Yelena; and her grandchildren: Victor Khaze and his fiancé Anita Núñez, Victoria Khaze and her husband Fred McDonald, and Vigen Khaze. ?

She will be sorely missed.