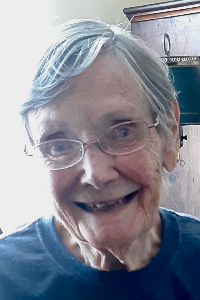 Genelle M. Nery, a long-time resident of The Village at Willow Crossings in Mansfield, Massachusetts passed on to her reward on November 23rd at the age of 96 – or as she was prone to say, “just four cents shy of a dollar.”

Born on March 1, 1926 in Cuero, Texas to Thomas Franklin Maness and Lura Bessie (Moffett) Maness, she is survived by her son Thomas Nery and his wife Sharon of Mansfield, MA; daughter Elizabeth LaPointe and her husband Kenneth of Narragansett, R.I. and their sons Christopher (and his wife Becky) and Jeffrey; daughter-in-law Karen Nery of Apex, North Carolina; grandson Carl Nery and his wife Crystal; granddaughter Abigail Stephenson and her husband Mark; and great grandchildren Lydia and Paisley Stephenson, Robert, Oliver, and Caleb Nery. Genelle was predeceased by her husband Robert (Bob) A. Nery to whom she was married for 69 years at the time of his passing in 2016. She was also predeceased by her eldest son Robert Nery, Jr. and her sister Anita Fae Neely.

Genelle and Bob met in the summer of 1944 when he was a gunnery instructor at the Army Air Force Base in Harlingen, Texas and where she worked for the US Department of Agriculture as a clerk-typist at the Farm Labor Supply Center. Love followed with plans to be married in the summer of 1946, an intention that was delayed when Bob was transferred to an out-of-state base. Those wedding plans came to fruition on November 1, 1947.

The couple eventually moved to Abington, Massachusetts where they raised their children and were devoted members of the First Baptist Church. Over time Genelle took a part-time job in the bookkeeping department at Sears & Roebuck in Brockton. Following Bob’s retirement as an engineer with Stone & Webster in Boston, the couple traveled the country in their RV, often stopping in North Carolina to visit their son Bob Jr. and family.

Upon her husband’s death, Genelle made her home at the Village at Willow Crossings in Mansfield where she was much loved and admired.

Feeding a constant hunger for knowledge, Genelle could always be found with a pile of non-fiction books by her side. She took her role as the family historian seriously and authored a near 500-page chronicle of the family’s lineage – a forever gift to her loved ones.

Genelle’s life will be celebrated in a private ceremony in North Carolina in the spring of 2023.