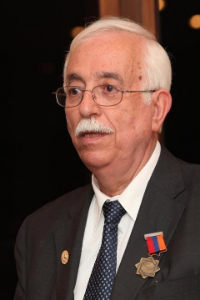 Jirair was born on April 21st 1941, in Beirut, to Garabed Tanielian and Sirarpi Topalian.

He attended the Mekhitarist School in Beirut, followed by AGBU’s Hovagimian-Manoogian Secondary School. He received his higher education at Haigazian University of Beirut, graduating with a bachelor’s degree in history and pedagogy, where he met the love of his life, Zevart. They got married shortly after and went on to have two daughters, Maral and Arpy, and four grandsons. Along with his bachelor's degree, he obtained the Normal Diploma. In 1998, he was awarded the Honorary Doctorate Degree from Yerevan University of Economics and Law.

In 2017, he received an Honorary Doctorate Degree in Armenology from the National Academy of Sciences of the Republic of Armenia.

Tanielian started his carreer at Haigazian University, where he served for twenty-three years, first as the head of the Armenian Library and then as the general University librarian. This period for him became a unique era of academic excllence in philology.

A very active public and cultural figure, Jirair was the Secretary of the AGBU Lebanon Education Committee (1985-1987), Secretary of the Central Board of the Armenian Youth Association (AYA-Antranik) (1987-1997), Chairman of the board of Khacher Kaloustian Pedagogical Center within the Catholicosate of Cilicia (2010-2020). He also was a member of 4 different commissions within the Catholicosate of Cilicia. Tanielian participated in several Armenia-Diaspora Writers' Conferences, including the Armenia-Diaspora Conference dedicated to the 20th anniversary of Armenia's independence. He was an organizing member of the three educational congresses organized by the Catholicosate of Cilicia. He held numerous public lectures in Lebanon, Syria, United States, Dubai, Abu Dhabi, Cyprus, Greece, Egypt, Yerevan, Canada, and England.

On August 4, 2020, he was seriously injured during the catastrophic explosion at the port of Beirut. Soon after he left for the United States of America for treatments, where he passed away two years later, on November 22nd, surrounded by his loving family.

Editor:
He has edited more than thirty volumes. He was the editor of the reprints of Western Armenia and Cilicia Memoirs (14 volumes) published on the occasion of the 100th anniversary of the Armenian Genocide.

Awards:
1999 He was awarded the "Haykashen Uzunian Literary Prize of the Tekeyan Cultural Association" in Yerevan.
1999 Winner of the "Haykazun and Anahit Vardivarian Competition" of the Beirutbased "Zartonk" daily.
2005 "Mesrob Mashdots" medal and consecration received from Aram I the Catholicos of the Great House of Cilicia.
2009 Order of the Writers' Union of Armenia during a ceremony in Yerevan.
2010 Certificate of Education from the Lebanese Ministry of Education.
2011 On the occasion of his 70th anniversary celebration in Yerevan, he received Republic of Armenia’s Ministry of Education and Science Gold Medal, the Republic of Armenia’s Ministry of Diaspora's "William Saroyan" highest medal, the first gold medal of the newly established "Faithful Professional" of the Union of Journalists of Armenia, and the "Ararat" Gold Medal.
2011 "Hagop Meghabart" Medal of the National Library of Armenia.
2014 "Movses Khorenatsi" Medal of the Order of the Republic of Armenia. 2-time holder of the A.G.B.U. Veteran’s member certificate.