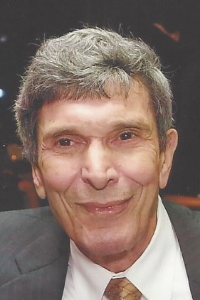 Jose L. Salgadinho, age 84, of Mansfield, passed away peacefully, in the comfort of his home, surrounded by the love and care of his family. He was the beloved husband of Vidalia G. (Pereira) Salgadinho, to whom he was wed for fifty-nine years.

Born in Sao Miguel, the Azores on December 5, 1937, he was a loving son of the late Jose and Maria de Lourdes (Dias) Salgadinho.

Jose grew up and was educated in Santa Clara, the Azores. He later moved to Canada and then settled in Mansfield where he happily resided for the past fifty-one years. Prior to retiring, he had been employed for many years as a Machinist at the Foxboro Co.

A communicant of Saint Mary’s Church in Mansfield, Jose’s love of family and his deep religious faith were the essence and focal point of his life and as a youth was ever-so-proud of serving as an Altar Boy.

Jose was an avid fan and number one supporter of the New England Patriots. He had a special love for trips to beautiful Cape Cod and the Mountains of New Hampshire. He will be dearly missed by all who knew and loved him.

In addition to his beloved wife, he is survived by his devoted children: Isabel Salgadinho and her partner Michael Damarell of Norton, Vidalia Gagne and her husband Francis of Mansfield, Charles Salgadinho of Mansfield and Michele Gundler of Mansfield. He was the cherished grandfather of Nicole, Joshua, Sarina, Erica, Charles, II, Nathan, Noah, Ethan, Emily and the treasured great grandfather of 6 great grandchildren.

His Funeral Mass, to which relatives and friends are cordially invited to attend, will be celebrated on Tuesday, November 29th at 11:30 A.M. in Saint Mary’s Church, 330 Pratt Street (Route 106) Mansfield. Burial will follow at Saint Mary’s Cemetery in Mansfield.

Visiting hours will be held on Tuesday morning, prior to Funeral Mass, from 9:00-11:00 A.M. at the Sherman & Jackson Funeral Home, 55 North Main Street, Mansfield.

In lieu of flowers, those wishing may remember Jose with a donation in his memory made to the Massachusetts General Hospital Department of Radiation Oncology, 55 Fruit Street, Boston, MA 02114.