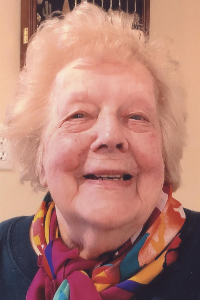 
Ruth H. Taylor, a Woburn resident for nearly seventy years, formerly of Wakefield, passed away peacefully at the age of 91, Monday, November 21, 2022 at the Lahey Hospital and Medical Center in Burlington. She was the beloved wife of the late Philmont A. Taylor. Born in Melrose she was the only child of the late John and Ethel (Mugford) Wills.


Ruth was raised and educated in the Greenwood section of Wakefield. She was a 1948 graduate of Wakefield High School and served as the class Vice President. Following high school, Ruth attended the Chandler School for Women in Boston and upon her completion she worked for several years as a secretary in Boston. She married Philmont Taylor of Wakefield in 1951 and moved to East Woburn where they resided for 14 years and eventually moved to the west side of Woburn where they lived for another 55 years. Ruth and Phil were married for 49 years prior to his passing in 2000.


A devoted wife, mother, and grandmother, Ruth was always very involved in her children’s' lives. She volunteered as a Girl Scout Leader and as a Den Mother with the Boy Scouts for many years, she was active and was a longtime member of the First Congregation Church and the Montvale Congregation Church both in Woburn, where she taught Sunday School. As a young girl she enjoyed horseback riding and throughout her life she was an avid reader and enjoyed playing cards with family and friends.


In keeping with Ruth's wishes funeral services will be private. It has been requested that in lieu of flowers contributions may be made in Ruth' memory to the charity of one's choice. Arrangements by the McLaughlin - Dello Russo Family Funeral Service of Woburn.